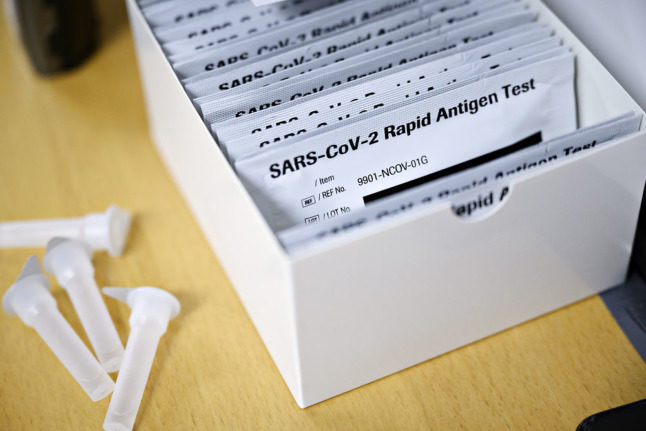 Covid-19 rapid antigen tests in Denmark. Experts say it may be beneficial for the country to reintroduce health pass and facemask rules with infection rates up. Photo: Philip Davali/Ritzau Scanpix

Denmark lifted all of its remaining Covid-19 restrictions in September, when daily infection rates were low. The number of people hospitalised with coronavirus in the country meanwhile dropped below 100 in the early part of the autumn.

That changed in late October, with daily new registered infections consistently totalling over 1,000 and the number of people admitted to hospitals with the coronavirus also on the rise.

On Tuesday, latest calculations from the national infectious disease agency State Serum Institute (SSI) place the reproduction rate or R-number for Covid-19 in Denmark at 1.1, meaning the epidemic in the country is currently growing.

A total of 1,981 new cases of the virus were reported on Tuesday. The number of people in hospital also increased to 255, the highest figure since February this year.

Denmark has a relatively high vaccination rate of over 75 percent and has also begun giving booster vaccinations to sections of the population, though the health minister Magnus Heunicke last week called for more people to take up the jab.

Ahead of meetings between Heunicke and members of parliament’s epidemic commission on Tuesday, experts said that a reintroduction of facemasks and the Danish Covid-19 health pass, the coronapas, should be considered given the current status of the pandemic in the country.

“At the same time it can motivate more people to get vaccinated and tested, and I think we need that in the current situation,” Wejse added.

“There’s a quite high reproduction rate just now. The numbers are something we should take seriously because when there are many infectious people, there are also many who risk getting seriously ill,” he also said.

Another expert who spoke to the broadcaster also expressed support for reintroducing coronapas requirements in some areas. He also cited the use of facemasks as a potential response to current infection rates.

“There are a whole lot of infected people in society whom we know nothing of. If everyone wears a facemask in public places, that would include people who are infected without knowing it,” Eskild Petersen, professor in infectious diseases at Aarhus University’s Departement of Clinical Medicine, told DR.

“Those two things [facemasks and coronapas] would be something I think would reduce the risk of infection here and now,” he added.

Because Covid-19 was in September downgraded from the status of “critical threat to society”, or samfundskritisk sygdom to alment farlig sygdom (“dangerous to public health”), the powers of the government to respond to it have changed.

A disease is considered a “critical threat” when it threatens the functions of society as a whole, by for instance, overwhelming the health system. In such instances, the government can unilaterally impose bans on people gathering, close schools, demand Covid-19 passes, and mandate use of face masks.

These powers no longer apply for Covid-19, which is now rated “dangerous to public health”, and a smitsom sygdom, an infectious disease. Instead, the (minority) government would need a parliamentary majority to vote to reimplement the critical status, allowing the far-reaching restrictions to return.

Not enough parties currently favour this for it to be an option for the government, but that could change if a majority in parliament’s epidemic commission or Epidemiudvalg, which includes representatives from all parliamentary parties, gives its support.