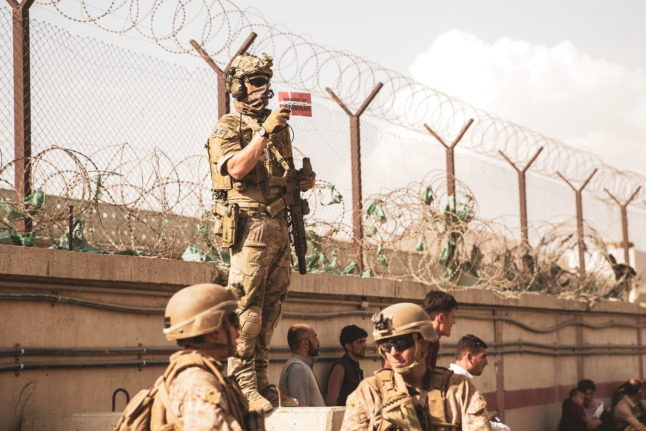 A soldier from Denmark mans the airport in Kabul. Photo: Us Marines/Reuters/Ritzau Scanpix

A Danish Hercules plane on Sunday lifted off from Kabul airport carrying close to 70 people, Denmark’s defence minister Trine Bramsen, said in a statement on the ministry’s Twitter account on Sunday, saying those on board had been “primarily from the Danish list” of Danish citizens and those with Danish residency.

“Thanks for the extraordinary effort, which was carried out by the defence forces and other agencies”.

The flight follows an earlier Hercules flight which carried about 80 people on board.

The chair of Denmark’s bar council has said that Søren Holm Seerup, the judge who this month found Danish People’s Party deputy leader Morten Messerschmidt guilty of defrauding the EU, put his impartiality in question through his Facebook posts on the case.

“In our eyes, the judge, with his actions, has gone beyond the bounds of how judges should behave,”  Martin Lavesen wrote in an article in the Berlingske newspaper. “Whether in doing this, he has disregarded the law, we should not pretend to a judge, but with his likes and comments, the judge has put himself in a position where the outside world is now left with a doubt as to whether the judge has actually been impartial.”

After the verdict in the so-called Meld case, Ekstra Bladet reported that Seerup has ‘liked’ a post from former Member of Parliament and Minister Søren Pind which cast doubt on whether Messerschmidt should remain vice president of his party.

Other newspapers have found several occasions where Seerup ‘liked’ posts about the Meld case years before he was asked to judge on it. On Friday, Messerschmidt appealed the judgement at the Special Court of Appeal.

The Danish pharma company Bavarian Nordic has shown that its vaccine generates a strong immune defence against coronavirus in early studies, now it is investigating its efficacy as a booster vaccine, given as a third dose to people who are already vaccinated.

A phase one trial of 45 people has demonstrated up to 12 times higher levels of antibodies than in people who have previously been infected, higher than among the existing vaccines.

According to a statement to the stock exhange, a study is now underway among 210 people in Germany, of whom 150 must be adults who are considered immune.

Autumn weather to creep in over Denmark this week

Monday and Tuesday may be the last days of the summer, so enjoy them! From Wednesday, the Danish Meteorological Institute (DMI), expects rain, cloud wind and lower temperatures. After that, the temperatures will probably be between 15 and 20 degrees for the rest of the week.

“There will be clouds and rain from the north on Wednesday, and it will also start to blow something. It will definitely feel a little more autumnal,” Bolette Brødsgaard, one of the institute’s meteorologists, told Ritzau.