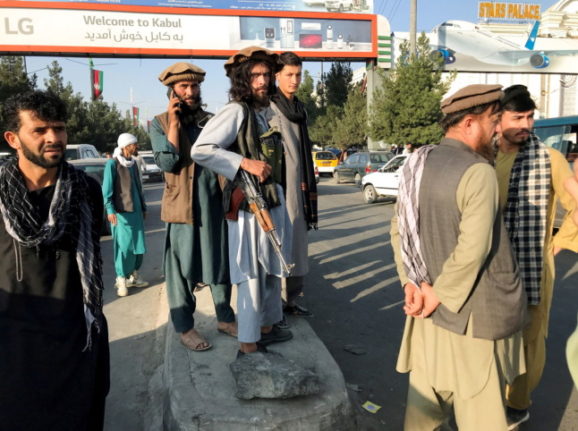 A member of the Taliban standing outside the Hamid Karzai Airport on Monday. Photo: Stringer/Reuters/Ritzau Scanpix

A group of Danish and Norwegian staff was evacuated from Afghanistan on Sunday “under very difficult circumstances”, Denmark’s defence minister, Trine Bramsen, said in a statement on Sunday night.

The Danish defence ministry did not disclose the number of evacuees, although on Monday morning Bramsen told TV2 that Danish citizens, staff and local employees still remained in the country.

“That is why we will still continue to operate, but I must also stress that it is very, very difficult,” she said. She said that most of those remaining were “local employees, interpreters and Danes who have only recently stated that they are in Afghanistan”.

She said that Denmark had moved Danish military airport to the area on Saturday, meaning Danish staff were not affected by the decision to stop civilian aviation.

“From the Danish side, we already made a decision on Saturday to have Danish military aircraft in the area for safety, in case it suddenly was no longer possible to operate with civilian aircraft,” she said.

Denmark and Norway announced on Friday that they would temporarily shut their Kabul embassies, while Finland would evacuate up to 130 local Afghan workers, ministers from the Nordic countries said on Friday.

“The Danes in Afghanistan must leave the country immediately, the situation is very serious,” Foreign Minister Jeppe Kofod told a news conference.

Norway echoed the move, with Foreign Minister Ine Eriksen Soreide telling a news conference that evacuation will also be available “to locally employed Afghans with immediate family in Norway who wish it”.

Meanwhile Soreide’s Finnish counterpart Pekka Haavisto said the country’s parliament had agreed to “take in up to 130 Afghans who have worked in the service of Finland, the EU and Nato along with their families” because of “the quickly weakening security situation”.

Sweden’s Foreign Minister Ann Linde tweeted on Friday that the country would only scale back its diplomatic presence for now,
but that preparations for the evacuation of embassy staff were under way.

The announcements come as Washington announced on Thursday that it was sending thousands of troops to Kabul to evacuate diplomats and other nationals in the face of the Taliban’s advance into the Afghan capital.