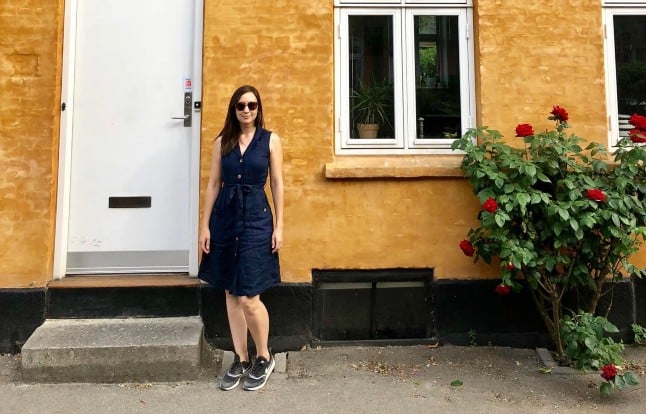 Leigh Gamon moved to Denmark five years ago, but did not expect to be unable to go home. Photo: Private

For Leigh Gamon, and her husband Luke, the new amendment has put paid to their last hope of friends or family back in Australia coming to visit them and their newborn son in Copenhagen, as well as making it unlikely they can make the trip home themselves.

As an Australian citizen, they would now be “required to demonstrate that [he has] a compelling reason for needing to leave Australian territory”, if he was to go back, under the new amendment.

“It’s just the risk of going and getting stuck there when we have an apartment, a baby, and our life here in Denmark. It’s just not a possibility,” she told The Local. “Because now you have to apply to be able to leave once you get there.”

The couple moved to Denmark from Australia five years ago after Luke got a job at Copenhagen University, with Leigh getting a job as a design manager at a Danish company soon after they arrived.

When Leigh got pregnant in 2019, the couple were expecting six different visits from various Australian friends and relatives after their son was born in early 2020. One and a half years later, they have yet to receive a single one, and their son is already one year old.

“That’s been a huge cause of stress, and future fear, and all of that for us. I’m super frustrated by what’s been happening.”

In a statement the government has said: “To date, these and other measures have greatly assisted in protecting Australia by preventing and controlling the entry, emergence, establishment and spread of Covid-19.”

Astronomical flight prices, reduced availability (some flights to Australia can only take 30 passengers) and frequent cancellations, as well as the cost of quarantining in a government hotel have been already been preventing many citizens from returning home. This new amendment makes it even harder.

The couple would usually see their families at least once a year, with either the families travelling to Denmark, or them to Australia. But it has now been more than two years since they visited, and with Australia seemingly lacking a clear plan on how to list restrictions, fears that the restrictions might even stay in place into 2023.

“We haven’t been home in two years. We haven’t seen any family or any friends in two years,” she said. “When I got pregnant, there was no Corona, so it’s been an absolute shock. It’s been awful. It’s made us really question where we live, and a lot of things in our life. The thought of no one in our family meeting our son until he’s two and a half years old.”

What is particularly difficult is the lack of clarity both over the Australian government’s requirements for leaving or entering the country, and also over when restrictions will be lifted.

“From what I understand, our reason [visiting family] isn’t really enough — it has to be something more, that someone has been very ill, or, in a serious situation,” she said. “It’s not very clear whether you can apply or not. I had a friend whose Mum came because my friend had a baby here, and she was on a specific birth programme, because there was a bit of anxiety and stress.”

But the cost of flights, quarantine hotel and a long stay in Denmark, was considerable.

“It cost her an arm and a leg to get here, and she had to stay for like two and a half months to make it because you have to stay [out of Australia] for a long time as well.”

For her own parents, the high cost, the risk of flight cancellation, the risk of being stranded in Denmark, as well as the risk of contracting coronavirus, has put a visit out of the question.

Leigh is far from alone though. The ABC reported that globally there are 38,000 Australians registered as wanting to return home from overseas, according to the Department of Foreign Affairs and Trade.

Australia is the only country that currently bans its citizens from leaving the country under an international travel ban which began in March 2020. Any infringements are punishable by a maximum penalty prison for five years or a fine of AUS$66,600 or both.

According to the government’s explanatory statement, the amendment is designed to “reduce the pressure on Australia’s quarantine capacity, reduce the risks posed to the Australian population from Covid-19, and assist in returning vulnerable Australians back home”.

Leigh thinks that the country’s approach might have made some sense as a way of preventing deaths early in the pandemic.

“I absolutely have some sympathy with it. And I think it was just one of those situations where every country took their own approach to it, and, of course, in Australia, as an island, it seems like a really great approach.”

The problem, she feels, is that as the dream of elimination and a zero-Covid world starts to fade, Australia hasn’t yet decided on how it will lift restrictions.

“They don’t really appear to have a plan for the fact that coronavirus is going to exist in society whether they like it or not, over the next, however many years. It’s going to get completely eliminated, so having an elimination strategy doesn’t really make sense, long-term.”

Leigh doesn’t expect the ruling Liberal/National coalition or Australia’s prime minister Scott Morrisson to risk lifting restrictions and seeing a resurgence of infections before the next general election, and that might not happen until the end of 2022.

“It’s constantly being extended,” Leigh says of when restrictions might be lifted.

“I’ve heard that there might be a chance of opening up in the middle of next year, you know, our [Australia’s] summer. And then I’ve also heard that no, it’s probably only going to be in 2023. It’s something that I get really upset about and try not to think about too much, because I don’t have any answers.”