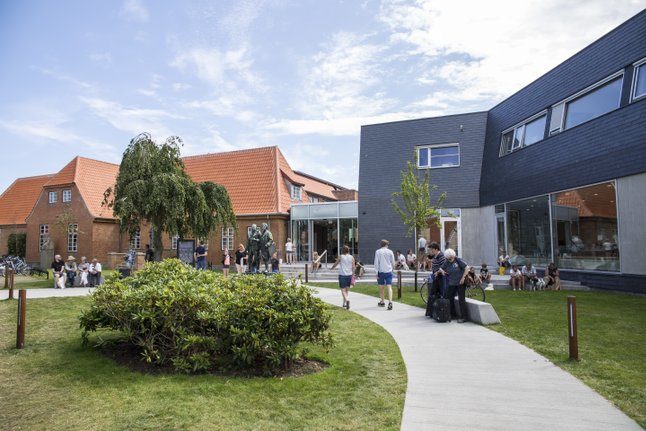 The art museums in Skagen will have to close if the town goes into lockdown. Photo: Skagens Museums

Skagen, the much-loved holiday town in northern Jutland risks going into a local lockdown after the number of new infections per 100,000 people rose to 835.8.

The number of infections in the town has been rising rapidly since the end of July, with the incidence quadrupling in six days.

Under Denmark’s local lockdown rules, a district or parish is shut down if it passes two of three thresholds: an incidence of over 1,000 per 100,000, more than 20 active cases, and a positive test percentage of more than 3.

A test centre in Odense is offering drop-in vaccinations, which can be given without an appointment, in the hope of increasing vaccine take-up among young Danes.

Pupils will return to the classrooms next week, but the Danish Health Authority has yet to update the latest guidelines, which were issued on February 5th, the Berlingske newspaper has reported.

“We expect to be able to send out an update at the same time as the schools start,” Andreas Rudkjøbing, a doctor with the authority, told the Berlingske newspaper.

According to the newspaper, the authority is advising the Ministry of Children and Education on how to update the guidelines.

A Danish parish priest been jailed for 15 years for murdering his wife by striking her on the back of her head with a stone and then dissolving her body in acid.

“I killed Maria. I ended her life, she did not deserve that fate,” Gotthard said at the end of his trial on Tuesday. “I am guilty of having lied and deceived you all. I’ve been a total thug. I have sent my life out into the darkness where I want to stay. No one should feel sorry for me.”

In a closed-door hearing, Thomas Gotthard had that morning told the court how he had planned the murder of 43-year-old Maria From Jakobsen and how, once she was unconscious, he had smothered her nose and mouth with his hands for several minutes until she was dead.

He said he had decided to murder her because of problems in his marriage and his fear that a divorce would have caused problems with his children and his existing ex-wife. He had also started a relationship with another woman who has was “wildly in love with”.

“It’s terrible to say, but it became a sort of hobby for him,” said Prosecutor Anne-Mette Seerup as she read out the explanation Gotthard had given in court. “This is not an unhappy love story about a man who could not get the love of his life. Or the third love of his life. On the contrary, this is a man who saw his wife as a block and chain around his leg.”

Influenced by an episode of Breaking Bad he had seen, Gotthard decided to dissolve the body in acid, buying a 208-litre feed barrel for the purpose. Read our story here.

A polar bear in Greenland may be shot dead next time it endangers people after several close encounters, including one
where it bit the hand of a documentary team member, authorities said.

The attack on the documentary team near an army base comes as the autonomous Danish Arctic territory experiences a record heatwave and as polar bears wander further for food.