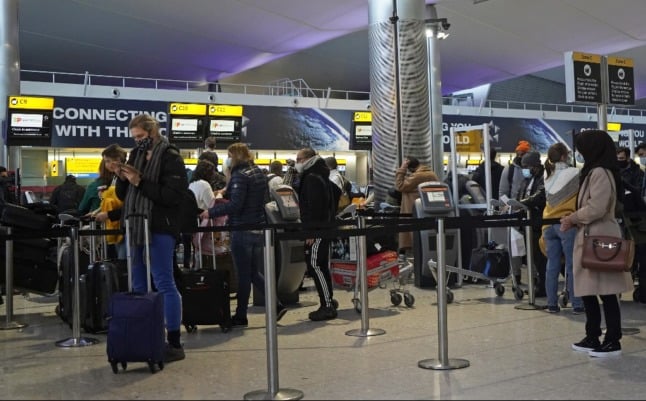 Transport Minister Grant Shapps took to Twitter to announce the move, saying the UK government was “helping to reunite friends and families”.

“We’re helping reunite people living in the US and European countries with their family and friends in the UK,” he said. The relaxation applies to arrivals in England, Scotland and Wales. Northern Ireland was set to consider the quarantine rules on Thursday.

The relaxation does not affect travellers from France given that the UK recently ranked France as effectively “amber plus”.

“Separate rules will continue to apply for those arriving from France,” the government said.

The UK government had previously relaxed the quarantine rules only for arrivals from amber-level countries who had been vaccinated under the British National Health System.

That caused much anger among Britons living abroad, who complained they were effectively being barred from seeing family at home.

The changes will apply to fully vaxxed people with an FDA or EMA vaccine 💉 – they’ll still need to do the usual pre-departure test before arrival and take a PCR test on day 2 of returning to the England.

After much speculation in recent days the UK government has finally moved to level the playing field.

Now from 4am on August 2nd any travellers from amber level countries – which includes the majority of European nations –  arriving in Britain who have been fully inoculated with a vaccine recognised by the European Medical Agency or Swiss vaccination programme (Pfizer, Astra Zeneca, Moderna or Johnson &Johnson) can now skip the mandatory 10 day quarantine.

“The UK Government has today (28 July) announced that passengers arriving from amber countries who have been fully vaccinated in Europe (EU Member States, European Free Trade Association countries (Iceland, Norway, Liechtenstein and Switzerland) and the European microstate countries of Andorra, Monaco and Vatican City) and the USA will not have to quarantine when entering England, as part of a range of new measures designed to continue to drive forward the reopening of international travel,” said a statement from London.

Passengers from all countries also cannot travel to the UK unless they have completed a Passenger Locator Form.

One thing that wasn’t immediately clear from the government’s statement is whether the PCR test needed on day 2 after arrival needed to be booked in advance of travel as is currently the case.

The UK does accept lateral flow or antigen tests for pre-travel requirements.

The relaxation for the moment does not apply to travellers from France – whether returning British residents or people living in France – given that the UK ranked France as a so-called “amber plus” country.

That last-minute decision caused much anger and bafflement because the UK government said it was based on the spread of the Beta variant in France – which has in fact been falling and remains less than five percent of all cases.

In recent days there has been speculation the British government will return France to normal amber level but not announcement has yet been made.

What has the reaction been from Britons in Europe?

Many took to Twitter as usual following the UK announcement to express relief at the move but also annoyance that they would still have to take PCR tests in the UK, which can be costly.

Feel free to drop the Pre-Departure test and Day 2 test for UK fully jabbed people who are going on holidays and don’t want to be RIPPED OFF on stupid tests to fly back home! Other countries don’t expect this for us to enter so why are you?

How about making the tests actually affordable?? for a family of 4 over 11 it’s a pretty expensive endeavour, especially when you provided a negative test to arrive in the first place! I’d much rather quarantine than pay your mates upwards of £100 per person!!

So as a Brit living in The Netherlands, presumably there are free testing facilities I can use in the UK on day 2 to get my PCR test? I’m assuming no one is going to try and make money off families being reunited after 18 months being apart? @grantshapps