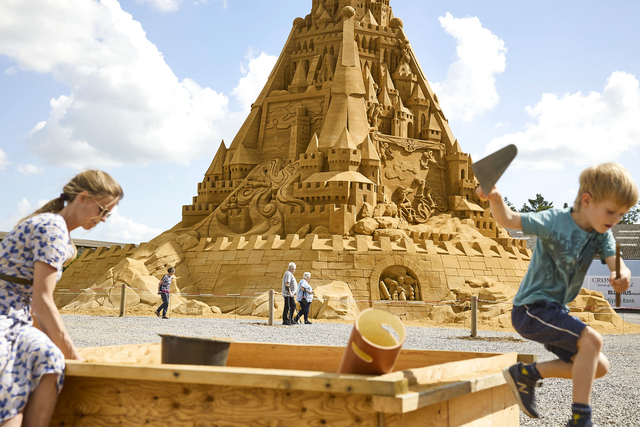 The Danish seaside town of Blokhus is now home to the world’s tallest sandcastle, standing at 21.16 metres tall. It’s more than three metres taller than a castle built in Germany in 2019, which previously held the title, according to Guinness World Records. Photo: Claus Bjørn Larsen/Ritzau

Fewer regional trains due to emergency track work in Copenhagen

Due to emergency track work at Copenhagen Central Station, there will be fewer regional trains than usual, according to Danish train company DSB.

This will impact trains on routes from Østerport to Slagelse, Østerport to Holbæk, and Copenhagen H to Orehoved. DSB hasn’t shared information on when normal train service will resume.

There are also fewer S-trains than usual on the Svanemøllen-Hellerup section due to errors in the signals at Nordhavn Station.

If you are more than 30 minutes late, you can apply for compensation for your ticket on DSB’s website under DSB’s Travel Time Guarantee.

The match came down to a penalty kick, a decision some have seen as controversial, in extended playing time. During the kick, goalkeeper Kasper Schmeichel also had to contend with a green laser shining in his eyes from the stands.

Although coach Kasper Hjulmand was bitter about the referee’s penalty kick ruling, he said he was hopeful for the future and proud of the team’s performance, especially in light of teammate Christian Eriksen’s collapse on the pitch in his country’s opening Euro 2020 game.

Five players, including Schmeichel, received top marks for their performance.

Now, the Danes turn their attention to the Tour de France, where 24-year-old Jonas Vingegaard has made it into the top three.

The Statens Serum Institut (SSI) has said 55.4 percent of Covid-19 cases in Denmark within the past week were with the more contagious Delta variant.

In mid-June, the variant accounted for just 6.4 percent of the positive samples. A total of 1106 cases of infection have been registered with the Delta variant in Denmark.

It’s also considered to cause more serious cases of the disease, and vaccines, while still effective, are not as effective as they have been against other variants.