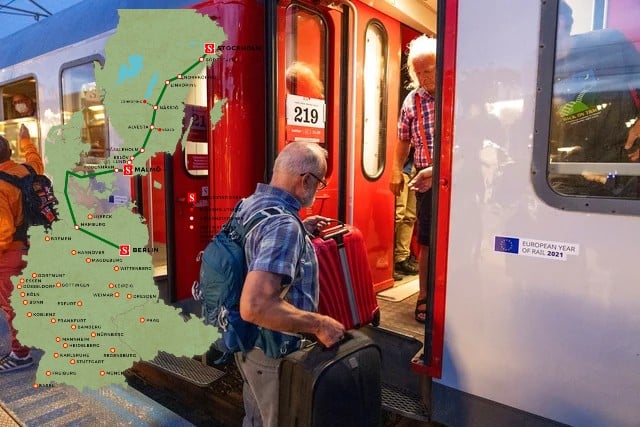 On June 27th, Swedish train company Snälltåget sent its first night train from Stockholm to Berlin, stopping in Høje Taastrup outside Copenhagen on its way to Germany.

This will be the first international overnight train route through Denmark since November 2014, when Swiss train service CityNightLine ceased service to Denmark.

Here’s what you need to know about the new night train connection from Copenhagen to Germany.

I’m ready to go! What time can I catch the train in Copenhagen? When will the night train run?

How much does the train cost?

Prices vary depending on departure and class of comfort. Prices are available via Snälltåget’s online booking system.

There are three levels of comfort. The most affordable option is the purchase of a basic reserved seat. There is also the option to book a wider reclining seat, which includes bedding. Private compartments, accommodating up to six travellers, are also available.

The private compartment can convert from seat mode into sleep mode, with three bunk beds on each side of the compartment. As a result of Covid-19, Snälltåget is not accepting solo bookings in compartments.

Snälltåget honors valid Interrail Global Pass, but also requires the purchase of a reservation, which vary in price from 145 DKK to 1680 DKK. The entire trip must take place within the validity period of your Interrail pass.

What amenities are available?

There are two restaurants aboard the train. This includes Krogen (The Pub), which requires a reservation, and Lönnkrogen (The Little Pub), which offers drinks, snacks, and pre-ordered breakfast.

The night trains offer Wi-Fi and power outlets, and each coach regardless of class has two toilets. Unfortunately, pets and bikes (except folding bikes) are not allowed on the journey.

I’ve made it to Hamburg or Berlin. What now?

In addition to experiencing Hamburg and Berlin, tourists can continue their journey by night train with ÖBB Nightjet, a service the Austrian national railway announced in December 2020. Night trains from Hamburg connect to Vienna, Innsbruck, or Zurich, and from Berlin to Zurich, Basel, or Vienna.

A French startup, Midnight Trains, is hoping to further expand Europe’s network of overnight trains in 2024, connecting cities in France, Spain, Portugal, Belgium, Germany, Denmark, and Scotland. The Guardian reports that ticket prices would be competitive with short-haul flights, including hidden costs of baggage fees and transit to and from the airport.

What’s behind the return of Europe’s night trains?

Over the years, Europe’s night trains were phased out as the popularity of low-cost flights and long-distance buses increased, The Guardian reported. Following the Covid-19 pandemic, it’s anticipated that tourists will have a greater interest in more sustainable forms of travel.

Night trains are a part of the European Commission’s plans to shift passengers toward rail service, as outlined in its Sustainable and Smart Mobility Strategy released in December 2020.

The new push toward night trains has long been awaited by some Danes. In 2018, the Transport, Building and Housing Committee at Christiansborg received roughly 42,000 signatures demanding the return of night trains in Denmark.

“There is great interest in traveling by train and night train, seen from an environmental perspective,” said Marco Andersson, sales manager in the Swedish company. Snälltåget says it utilizes green energy, including water, solar, and hydroelectric, to reduce the environmental impact of the overnight train journey.