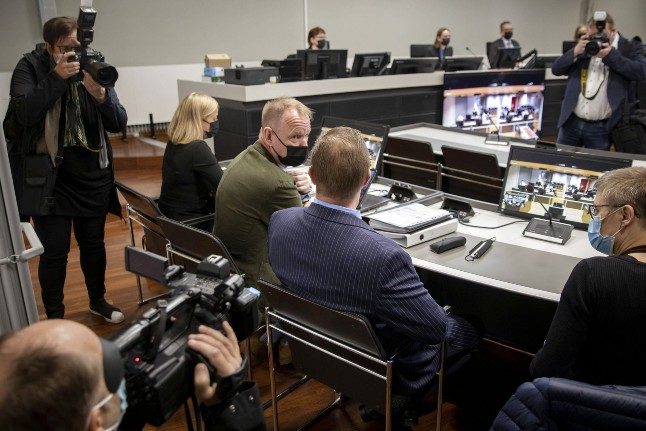 Herman Himle (in blue suit) in the courtroom in Turku during the trial. Photo: Lehtikuva/Reuters/Ritzau Scanpix

Herman Himle, an 18-year-old scout at the time of the crime, was arrested in 2020 after new information came to light relating to the long-unsolved murder of Klaus Schelke, 20, and attempted murder of his girlfriend Bettina Taxis, then 22 aboard the Viking Sally cruise ship as it travelled from Sweden to Finland.

The two students from West Germany, on a tour of the Nordic countries, were discovered with serious head injuries in the ship’s open-air sleeping area in the early hours of July 28, 1987.

Schelke died while being airlifted to hospital, while Taxis survived with serious and lifelong injuries.

But on Wednesday the court dismissed the charges of murder and attempted murder, saying in a statement that the prosecution “failed to prove the defendant was the only person with the opportunity and possibility of carrying out the offences.”

At the start of the trial in May, prosecutors said that Himle had since told people that he had “killed and got away with murder.

Himle’s defence argued that he had made such confessions to scare people or test their trustworthiness, and that they were not real.

Judges agreed that the claims did not mean Himle’s guilt “could be considered proven or even probable.”

Prosecutors questioned how the accused knew the suspected weapon was a welding hammer, given that police had not released that information.

But the court ruled that because the murder weapon was never found, “the defendant did not have any knowledge of the weapon that only the perpetrator of the crimes could have had.”

Although police questioned everyone on board at the time, the murder remained unsolved in part because of incomplete passenger records and a lack of DNA and CCTV evidence.

The Viking Sally was later renamed the MS Estonia, which sank during a crossing from Estonia to Sweden in 1994, claiming 852 lives.