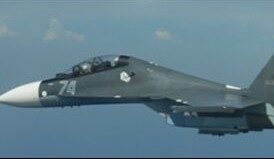 A blurry image of the Sukhoi Su​-30 jet captured from a Danish F-16. Photo: Danish Defence
“It can not be seen as anything other than a deliberate and intentional provocation when you ignore warnings like this,” Denmark’s defence minister, Trine Bramsen, told TV2 after briefing the parliament’s foreign policy committee.
“It cannot possibly be a navigation error when you ignore warnings and even go and do it twice,” she continued. “This is something that we consider a completely new and aggressive act.”
READ ALSO: Denmark decries airspace violations by Russian planes
The Danish defence ministry also shared two maps detailing the routes taken by the Russian jets on the two times they violated Danish airspace.
In the first, you can see the jet (red line) entering Danish airspace north of Bornholm, and then looping out of it again after being met by the Danish F-16 (blue line). In the second violation, the Russian jet (red line) is accompanied by the Danish F-16 throughout the event. Karsten Marrup, head of the Center for Air Operations at the Defense Academy, told the Ritzau newswire that he could not remember any previous violations that had been as serious.
“I am not aware that there has been a situation that has been worse than the one last Friday, where the Danish planes have had to repel and escort Russian fighter planes out in that way,” he said.
The two Russian fighter jets were first contacted over the radio, and were then met with two Danish F-16 jets. Despite this they still flew on into Danish airspace at 11.08, returning for a second time at  11.40.
“What happens the second time they enter Danish airspace is that you place one of the planes at an angle in front of the Russian fighter planes, where you can be seen. And then you wave your wings. This means that they must follow. Which they did.”