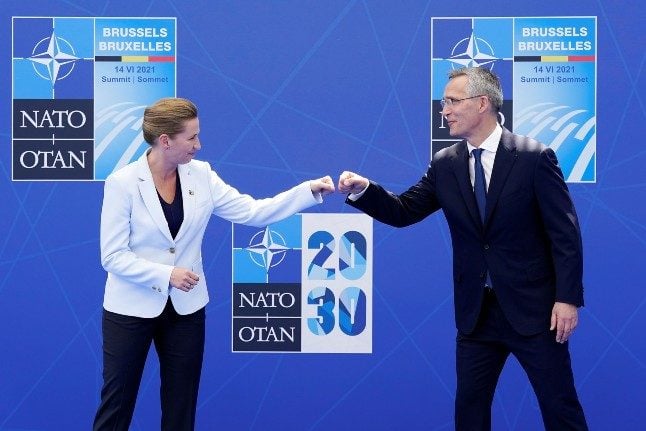 “One of the things we agree on is that Nato is starting to become more political,” she said after a meeting on Monday she described as “unusually successful”, and marking the start of “a new chapter for our alliance”.

She said she had been pleased that US President Joe Biden had made such a strong statement in support of the alliance.

“It means a great deal that we have once again got a US president and an administration that is unequivocally and unreservedly supportive of the rules-based world order, and that completely and unequivocally supports Nato and Article 5. That is the whole core of our cooperation,” she said.

At the meeting, the national leaders agreed to see China as a “systemic challenge”, and also discussed the threat from Russia, a question newly relevant for Denmark after a weekend when Russian fighter jets twice violated Danish airspace.

Danish striker Christian Eriksen, who suffered a cardiac on the pitch on Saturday,  has tweeted from hospital using the Twitter account of the Danish Football Association.

“I’m fine — under the circumstances,” he wrote in English. “Now I will cheer on the boys on the team in the next matches.”

Denmark’s minority Vegan party, which sits outside the parliament, has chosen veteran animal rights activist Ulla Koch as its new leader. She is the third leader the party has had since it was founded in 2018, with her predecessor Henrik Vindfeldt only taking over the leadership in September, and his predecessor Michael Monberg resigning the month the Vegan party became eligible to compete in the next general election.

Denmark to swelter in summer heatwave from Thursday: DMI

Large swathes of Denmark, including the capital Copenhagen will be basking in tropical temperatures of around 30C on Thursday and Friday as the country enjoys the first heatwave of the summer.

According to a forecast from the Danish Metereological Institute (DMI), a front of hot air will move over Denmark on Wednesday evening.

“The combination of the warm air and largely cloudless weather will give rise to heatwaves in parts of the southern and eastern areas of the country,” predicted meteorologist Lars Holtmann. Read our story here.

As many as 5,000 nurses in Denmark may go on strike this Friday after voting down a salary deal agreed between nursing unions and the regional and local governments that run Denmark’s health system.

A full 66.7 percent of the members of the Danish Nurses’ Organization voted down a new agreement struck between their union and Danish Regions and Danish Municipalities, meaning a strike could be called as early as Saturday.

“This big ‘no’ shows even more clearly that there is a need for some fundamental changes in wage structures,” said Grete Christensen, the nurse organisation’s chair, who had recommended that members vote in favour of the deal.

“We believe that there is hope [of progress]in the salary structure committee, but the pledges were too vague and unclear for the members to see the same hope.” Read our story here.

Denmark’s goalkeeper Kasper Schmeichel and striker Martin Braithwaite on Monday lamented that they had to choose whether to restart the Denmark-Finland Euro 2020 match while they were reeling from Christian Eriksen’s mid-game collapse.

“We were put in a position, that I personally feel that we shouldn’t have been put in,” Schmeichel told Danish media at a press event in Helsingor north of Copenhagen.

“We had two options,” Schmeichel explained. “Either come back the day after (Sunday) at noon or continue the game.”

The Leicester City goalkeeper said he wished someone more senior had said “that it wasn’t the time to take that decision, and that we should maybe wait until the day after to decide”. Read our story here.