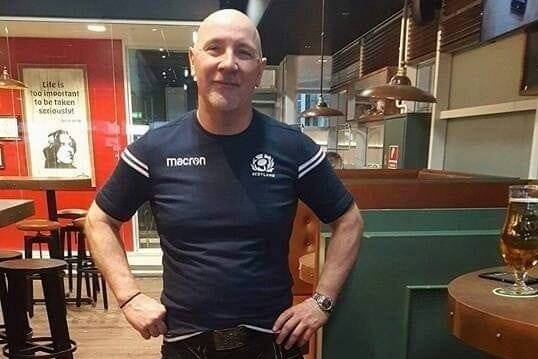 Mikael Davie has been living in Denmark for 30 years but still puts on a kilt to watch the rugby. Photo: Facebook/Private

Until Brexit came, Michael Davie didn’t give much of a thought to becoming a Danish citizen. The bar-owner turned truck-driver had got along fine for 30 years in Denmark with a British passport and EU citizenship, and even after Brexit, it took almost no time to get permanent residency.

But this year, as he prepared to take his citizenship exams, he came in for a shock. The Danish government on April 20th agreed a draconian new set of citizenship rules with other political parties, and Davie soon realised he was one of the victims.

Under the new rules, people with previous convictions for which they have received conditional or unconditional sentences would be permanently barred from being granted Danish citizenship.

“Up until April 19th, I could have applied and now I can never have a Danish passport, no matter how long I’ve lived here. it’s as simple as that,” Davie told The Local.

“I think that’s unfair when you see that I’ve never been unemployed. I’m not a criminal. I’m not a gang member. I haven’t even had a speeding ticket or parking fine in 25 years.”

Davie’s troubles date back to 1995, when he’d been in Denmark for four years and was running a group of bars in and around Odense. One of his employees had been fired for being drunk while on shift, and had called up Davie’s then-wife, who was heavily pregnant at the time, and abused her over the phone.

“He was very rude, very nasty.” Davie remembers. “I probably wouldn’t have bothered about it that much, but then I met him on the street and one thing led to another and we got into a fight.”

Davie trivialises the fight somewhat, arguing that it was not particularly serious. “He fell and he hurt himself, and he got, like, a bruised face, but it wasn’t like baseball bats, it was just a fight like you’d see anywhere else. It wasn’t brutal.”

But because Davie was running a set of licensed premises, he was treated more severely by the court and, although he received no fine, he got a one-year suspended sentence.

In Denmark, a suspended sentence is taken off the public records after three years, and off the police’s private records after ten years, so the Danish authorities have no record of the offence.

But the new citizenship application form does not ask whether applicants have a current criminal record, but whether they have ever been given a prison sentence, suspended or otherwise.  Although he could probably have got away with lying in the form, Davie did not want to do that, meaning he is barred from being a citizen.

“For the last 25 years, I haven’t had any issues whatsoever. I have no criminal record, so why am I being punished twice when I have already served my suspended sentence?” he complained to The Local.  “I’m quite established here, you know. My ex-wife is Danish, my kids are Danish, my grandkids are Danish, so obviously I want to protect their rights too.”

On Thursday, Davie will meet Denmark’s immigration minister Mattias Tesfaye for a one-hour meeting, along with an Iranian student and a German midwife, both of whom are struggling to get citizenship due to the stricter rules. The meeting, part of the Virtuelt Folkemøde political festival, will be broadcast on Facebook here.

“I think maybe he’s realised that they’ve pushed it too far and that it’s affecting a lot of people,” Davie said of Tesfaye’s motivation for holding the meeting.

“I think the foreigner laws are getting out of control. I think it’s time they start realising that there are Europeans as well in this country that are starting to live in what they call ‘parallel societies'”.

“I understand their fear of these criminalised gangs, but this law is so wide that includes people with parking fines. It won’t just push off rapists and murderers but also people like me.”

“You know, not everybody’s innocent, and if anybody says they are, they’re probably lying. You should be allowed to make mistakes, and if you pay the price, you shouldn’t be punished the rest of your life for it.”