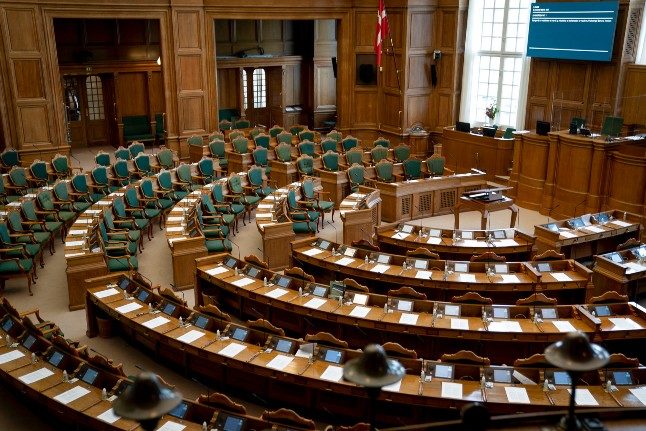 The closing debate will be held today in the main debating chamber in the Danish parliament. Photo: Liselotte Sabroe/Ritzau Scanpix

Denmark’s Prime Minister Mette Frederiksen plans to break with protocol when she gives her speech at the Danish parliament’s closing debate on Wednesday. Instead of, as is traditional, looking back over the past year, she wants to look forward over the next ten years.

“The parliament has its big closing debate today, and we must discuss the past year. I want to give a slightly different speech – and instead look forward over the next ten years,” she wrote on Facebook.

Frederiksen in an interview on Friday announced a major reform plan, which aims to boost employment, increase decentralisation and improve primary schools.

The number of PCR tests given in Denmark, which has stayed for months at around 175,000 a day, has fallen over the last week, slipping under 150,000 a day on Sunday, according to the latest figures from the SSI infectious diseases institute.

For the fifth week in a row, the so-called reproduction number in Denmark is 1.1, the country’s health minister Magnus Heunicke has said over Twitter. This means that on average every ten people who catch the virus pass the infection on to eleven more, meaning the level of infection is slowly rising.

“We are keeping the infection in check with our strong tools to break infection chains: Intensive testing, sequencing, vaccines, infection detection, and targeted local closures,” he wrote.

The reproduction number is calculated retrospectively based on the infection situation a week and a half ago.

In the 24 hours leading up to Tuesday afternoon 908 new infections were registered in Denmark, more or less in line with the average of 962 per day over the last month.

Some 6,600 people will take the Danish citizenship test today, despite outdated syllabus

Thousands of would-be Danish citizens will take their Danish citizenship test today, but according to an analysis by state broadcaster DR, the learning material they are given to study is seriously out of date and full or errors, making the already challenging test even more difficult.

The teaching material, among other things, says that:

The learning material has not been updated since 2016, and the Danish Agency for International Recruitment and Integration, which is responsible for the tests, told DR that no questions would be asked about facts for which the learning materials were out of date.