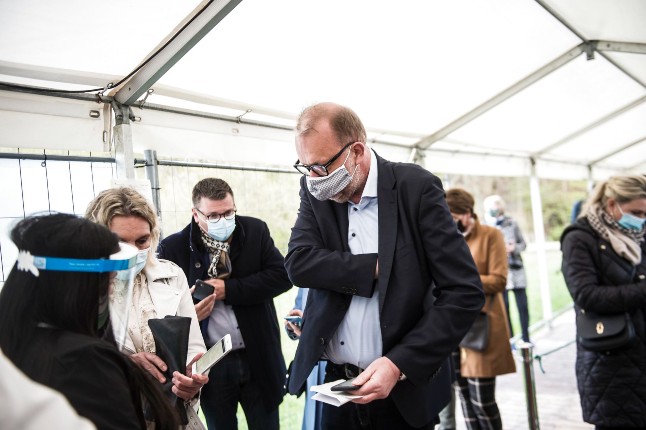 A full 82 percent of the 57 people who responded said they were either “quite positive” or “very positive” of Denmark’s decision to launch the coronavirus passport and require it for entry to bars, restaurants, cafes, museums, galleries, theatres, concerts, and sports clubs, with only 13 percent (seven people) feeling “very negative” towards the idea.

“Knowing that people have been tested makes me feel safer in restaurants, museums etc,” writes Daniela Negruța,24, from Moldova. But she also adds: “It’s quite annoying to get tested multiple times a week to be able to go to the gym.”

Konstantin Patroev, 25, from Bulgaria, argues that one of the main benefits is that it incentivises everyone in the country to get tested several times a week.

Roberta Cammarata, 33, from Italy, is impressed that the tests and the app are free. “It’s all digitally organised, free of charge and test results are fast,” she writes.

“I think the setup is very smooth and the syncing between test centers and the app is seamless. It makes me feel safer being out and about knowing that it is required,” says Christopher Ozuna, 33, from the US.

READ ALSO: Tell us: How is Denmark’s coronavirus pass system working for you?

It’s not just the idea that has gone down well, a full 79 percent of respondents said that the system, from the test centre to the coronapas itself, worked either “quite well” or “very well”, with 13 percent arguing it worked “quite badly” or “very badly”.

“I personally think the system works flawlessly,” says Robbie Dyer, 30, from the UK.”Appointments are available either same or next day in Copenhagen and I have 4 PCR test centers within a 15-minute cycle from my front door. It helps to make otherwise risky situations such as getting a haircut or sitting inside a cafe or restaurant feel safer.”

“It collates all of your Covid-19 health information into one system that’s easily accessible for the user,” says Alex Clermont, 33, from the US. “I like that it’s in three languages (Danish, English and French) and from the Danish Police. It should make travel outside of the country much, much easier.”

Easier access and ability to see validity at a glance

The most frequent criticism of the way the coronapas has been set up was that it leaves the holder (and the person who has to check the pass) to work out if it is valid or not themselves, by studying the test or vaccination dates displayed.

“It’s difficult to notice if it’s valid pass. The colour should be green and then the moment it expires it should turn red in colour,” writes Anand Gundanna, a suggestion made by several others.

“It’s confusing. It has to be calculated by the viewer. It would be better if it just says when it expires,” says one anonymous respondent.

Negruta says she wishes that she could access the pass directly from the start screen of the MinSundhed app.

“The way it’s displayed isn’t what bothers me, it’s how long it takes to actually get to show your corona pass. It would be cool to have a corona pass button on the start screen.”

Clermont wishes that you could download the key page to Apple Wallet.

“The display is very good and easy to access. The only thing I would add on iOS is an ability to add the pass to the Apple Wallet. This would allow quicker access, just as you can access a credit card or plane ticket stored on your iPhone.”

Namit Karlekar, 40 suggests that it would be better if it already had a QR code, as the full coronapas app expected later this month will probably have.

Queues and other problems at test centres

Several people complained about the queues at test centres, both as an inconvenience and as an infection risk.

“The queues are way too long, 1.5 hours on a regular weekday, worse on Fridays,” moaned one anonynmous respondent.

“Annoyingly long for many test centers. I now prefer spending 40 minutes to get to the airport, but at least I don’t have to wait in long lines,” says Cammarata.

Nicola Lal, from New Zealand, wished she could book multiple PCR test appointments, as her son needs two a week for school and it is difficult to get times when required.

Several people felt that test results should be valid for longer, perhaps for as long as a week.

Glitches in the app

Negruta says she has sometimes found herself stuck at the entrance of places to go “because the app doesn’t load up”, while Michael Everingham, 41, has found the coronapas mysteriously disappearing from his MinSundhed app at crucial moments.

Even when it’s not the fault of the app, others complained that when there’s a weak mobile signal, the app can be slow to low, making it difficult to enter places.

Things that app can’t or doesn’t do

Martha Ivester, 54, complains that it’s impossible, or perhaps just very difficult, to get vaccines received outside of Denmark to register in the system, with her doctor trying and failing to get her Johnson & Johnson jabs registered, and the notifications she gets in her e-boks secure digital mailbox are all PDFs in Danish which are hard to translate.

Several people suggested that the coronapas app page should provide other personalised information on coronavirus, telling you, for instance, when you can expect a jab in the vaccination calendar, and then linking to the booking system.

One anonymous respondent said she wished the app could link with other apps, so you could, for instance, download your coronapas to the app of the SATS gym chain.

Not all bars and restaurants ask for a pass

Gundanna said that he found that he wasn’t being asked to show his pass. “Basically, I didn’t experience them asking for a pass, which is failure in the process or protocol,” he said. “My observation is people are busy at their work and they think everyone has valid pass.”

As a result, he said he still didn’t feel safe attending events or going to museums or galleries. “I feel people take it easy as soon as they have corona pass and they think the surroundings are, very safe which is not true. Restrictions should still be followed strictly by each and everyone and lenience or negligence should not be shown by the government.”

Wrong for rapid tests to be valid

Dyer thinks that PCR test should be required for the coronapas and antigen rapid tests should be excluded. “They’re much more sensitive and therefore less likely to give false negative results. The covid19 infection figures in Denmark are still worrying, so more should be done to keep the rate of infections lower whilst still allowing society to open up.”

“The booking system has a questionnaire in Danish only,” says Zuzana. “It would be nice to have the information in English as well (considering how many foreigners live at least in the Copenhagen area)…but Google Translate saves lives”.

“It’s much harder when you don’t know Danish. I usually ask friends for help,” says one anonymous respondent.