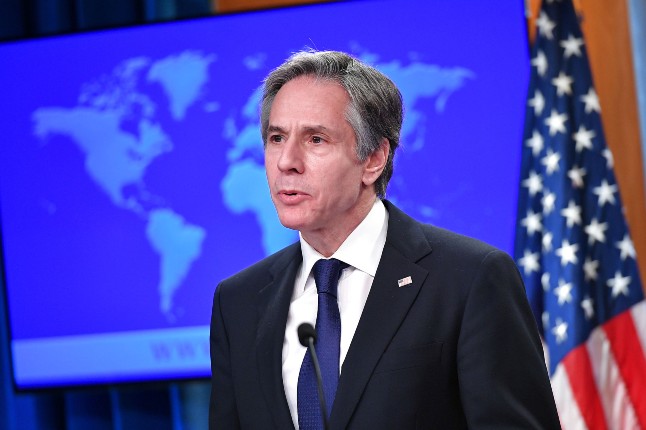 US Secretary of State Antony Blinken will be meet Greenland's new prime minister for the first time. Photo: Pool/Reuters/Ritzau Scanpix

Climate change is rapidly transforming the Arctic, expanding roles for China and Russia, and making it an ever bigger strategic priority for the US.

Blinken’s trip will come on the heels of his already announced visit to Iceland for an Arctic Council meeting where he will hold his first meeting with
Russian Foreign Minister Sergei Lavrov amid a range of tension between the two powers.

Blinken will start the trip Sunday in Denmark, of which Greenland is an autonomous territory, two years after an unusual but bitter row when
then-president Donald Trump said he wanted to buy the vast island.

The top US diplomat will meet Greenland’s full leadership on the stop Thursday in Kangerlussuaq, the sparsely populated island’s main transport hub.

“They will discuss the strong partnership between the United States and Greenland and our shared commitment to increase cooperation in the Arctic,” State Department spokesman Ned Price said in a statement.

In Copenhagen, Blinken will meet Prime Minister Mette Frederiksen and other Danish leaders as well as business people on issues including “combating the climate crisis,” including the development of new technologies, Price said.

Climate change has quickly opened up once unpenetrable waterways in the Arctic, paving the way both for shipping and greater conflict among major
powers.

In a speech last month, Blinken warned that Russia “is exploiting this change to try to exert control over new space,” including through modernizing
bases, and also pointed to a growing presence of China.

Hans Redder, political commentator at Denmark’s TV2 broadcaster, said that Blinken’s trip meant that “all of this increased interest in Greenland and the Arctic conditions was far from being something that disappeared with Trump”.

“Trump expressed his interest in a somewhat baroque way, but the US interest in Greenland is unchanged, even though there is another president today. The same applies to the potential geopolitical tensions that may arise in the area.”

Unlike Trump, President Joe Biden has put a major priority on fighting climate change, setting an ambitious goal of more than halving US greenhouse emissions by 2030 from 2005 levels.

Blinken’s predecessor Mike Pompeo, in a 2019 appearance before the Arctic Council, similarly warned about Russia and China but said that melting ice caps offered “new opportunities for trade,” while not directly addressing climate change.

Pompeo last year canceled a planned visit to Greenland but traveled to Denmark to move past tensions.

In 2019, Frederiksen said that Trump’s offer to buy Greenland — which was not up for sale — was “absurd,” leading the realtor turned president to call
her response “nasty” and scrap a visit to Copenhagen.