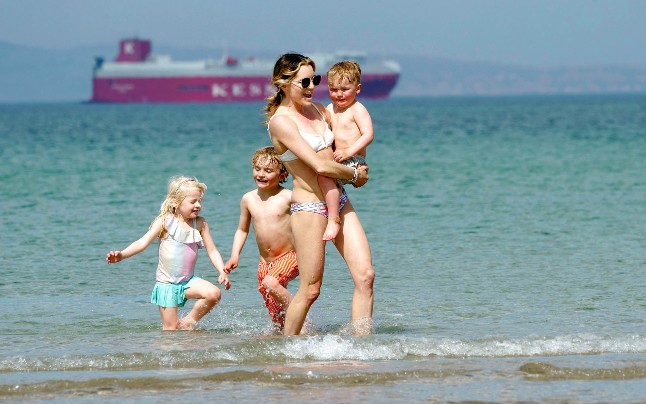 A family takes advantage of the warm weather in Hornbæk on Sunday. Photo: Keld Navntoft/Ritzau Scanpix

A warm front came over Denmark on Saturday, with a temperature of 22.4C measured in Horsens on Sunday, making it the hottest day of the year so far.

Monday is expected to be hotter still, with temperatures potentially hitting the 25C threshold, before falling off again on Tuesday.

“We have a warm front from Southern Europe blowing right up above us at the moment,” said Mikael Jarnvig, a meteorologist from state broadcaster DR. “From Tuesday, this hot air will be directed further east and will decrease in speed. This means it will be colder in Denmark.”

Alongside the warm weather, Denmark saw several powerful thunderstorms on Sunday night, and several more are on their way.

“Currently, a thunderstorm is on its way to Djursland, after which it will move beyond the Kattegat,” Bodholdt said.

“Even though we will get hot weather on Monday, it will not be one of those days of blazing sunshine. There will also be quite a few clouds. Especially in Jutland.”