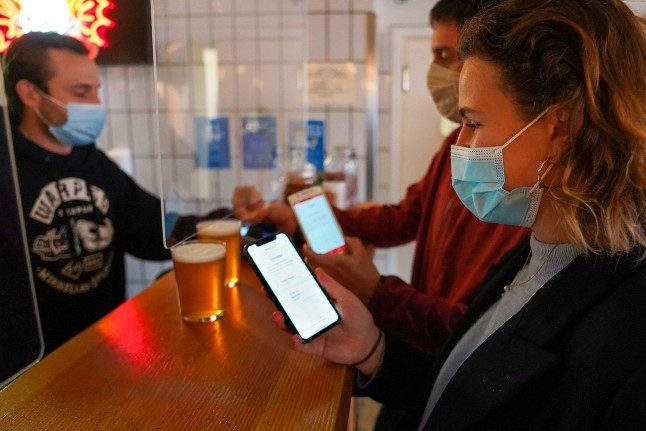 It is only a month since hairdressers and other service industries classed as liberale erhverv, and barely a fortnight since restaurants and bars could reopen, but already the number of cases is on the rise.

Some 1,023 new daily cases were reported on Friday and 1,012 on Thursday, take case numbers back to levels last reported in mid-January.

As well as a rising number of identified cases, the share of those being tested who turn out to be positive is also at the highest level since the end of January,  at 0.51 percent on Friday, meaning about one in every 200 people who take a test is positive.

Denmark’s health minister Magnus Heunicke pointed out on May 4th, as the government reached a parliamentary deal on the next phase of reopening, that Denmark was already on an upward trend.

“The reproduction number is estimated at 1.1, which means we have a gently rising epidemic in Denmark, but that is to be expected given that society is reopening,” he said. “On Thursday, we’re opening even more so let’s remember all that good advice on distance, hygiene, and testing.”

According to Christian Wejse, a specialist in infectious diseases at Aarhus University, the four-month high in the daily number of cases is no reason to panic.

“I wouldn’t say I’m worried,” he told The Local. “It’s to be expected that will see an increase in numbers given the reopening. It’s more of a surprise that we haven’t seen it so far, given the reopening we’ve had since mid-February, when we brought the youngest back to school.”

“So far, we’ve focused on opening sectors with very low risk, such as elementary schools, now we’re moving onto much higher risk area such as bars and fitness centres, and, perhaps more importantly, people are also starting to see more people privately as well.”

He cautioned that rise in the percentage of positive tests could be at least partly explained by the large number of rapid tests being taken, which are not included in the test figures. People who learn they are positive through a rapid test then get PCR tests.

On Thursday, Denmark’s infectious disease agency said that 369,598 rapid tests had been taken over the past day.

“It could just be a fluctuation, and there’s been a lot of extra testing now because of the corona passport, so it could be just because of that, but it’s probably because there is an increased transmission right now,” he said.

Will Denmark have a delayed third wave?

By keeping some restrictions in place for more than four months, Denmark has not suffered a third wave like those seen in Sweden, France, and Germany.

But has it avoided a third wave or simply postponed it?

“We could be on the verge of a third wave,” Wejse said. “We’ve had very stable numbers for several months, despite the gradual reopening, but what we’ve seen the last couple of days has been higher numbers than previously. Whether that’s going to stay at this slightly higher level or whether it’s going to break out into an actual third wave, I’m not sure.”
How dangerous might a third wave be?
If there is a third wave, Denmark would at least benefit from having a higher share of the population vaccinated than other European counties have had when their third wave struck.
“It would definitely be better than it was when we had the big second wave in December, because at that point of time, we had no one vaccinated, whereas about 25  percent of people have now had at least one shot,” Wejse said. “So that’s going to block transmission somewhat, because there are a lot of transmission chains that will be broken.”
Denmark’s health minister Magnus Heunicke celebrated on Twitter on Friday after the country’s passed a new vaccination milestone, with one in every four Danes having had at least one jab.

Denmark leads the European Union in the share of its population who are fully vaccinated.
But with many in the 60-70 and 50-60 age bracket still to have the jab, Wejse said a sharp rise in infections would nonetheless result in a spike in hospitalisations and deaths.
“There is still a pretty large group who are vulnerable — not as vulnerable as those who are over 70 — but if we get a big transmission in the 60 to 70-year-old age group, we will see quite a number of severe cases, and hospitalisations,” Wejse said.
If there is a second wave, does that mean the coronavirus passes aren’t working?
Wejse argues that even if the latest phase of reopening leads to a spike in infections, it does not mean that government’s decision to fund a massive testing programme and bring in coronavirus passes for pubs, restaurants and gyms does not make sense.
“It certainly helps to keep activities going in a safe manner, because you can gather people together with a low risk of having an infectious person in the room,” he said.
“But it’s not 100 percent: there’s a low sensitivity with many of the rapid tests, and also the coronavirus pass is valid for three days, so you can still be infectious even if you have a valid coronavirus pass. It’s not a bulletproof defence, but it’s definitely a good way to keep activities and sector open.”
Most importantly, he said, if there is a surge in cases it is more likely to be fuelled by the gatherings people have in their own homes where no coronavirus pass is required.
Will there be another lockdown?
Denmark’s reopening includes a mechanism for local lockdowns if an area has a high level of infections. From April 30, a district has to go into local lockdown if 20 people test positive in less than a week and 2.5 percent of tests are positive, and there are more than 500 infected per 100,000 citizens.
Gyms had only been open for two days before a local lockdown was triggered in the municipality of Horsholm on Friday. The lockdown was triggered after eight upper secondary school students got infected when they gathered to watch a champion’s league match together.
According to DR; another district is also currently under a local lockdown — Jerne in Esbjerg municipality.
But Wejse said the number of daily cases would probably need to rise closer to 2,000 cases a day before the authorities would feel forced to bring back some of the heavy restrictions in place in January and February.