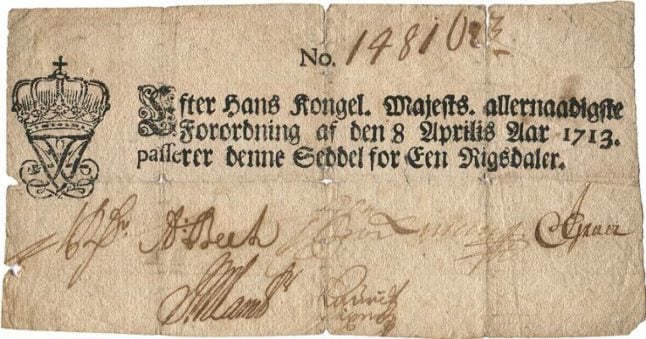 The banknote was printed in 1713. Photo: Bruun Rasmussen

The one ‘rigsdaler’ note dates back to 1713, when King Frederick IV issued Denmark’s first paper money, backed by Royal guarantee, to replenish the Royal coffers due to the expenses of the Great Northern War (1700–1721), which saw Denmark team up with Tsarist Russia and Saxony in an ultimately successful attempt to break the dominance of the then mighty Swedish empire.

“In addition to being exceptionally rare, the banknote is also of great monetary historical significance. It is the baptismal certificate of the Danish banknotes that we are dealing with here,” Michael Fornitz, chief numismatist at the auctioneer, Bruun Rasmussen, wrote in a statement posted on Facebook.

“It was the first time in Denmark that money no longer needed to be silver or gold, but could also be made of paper. In addition to being one of the very first copies, the banknote on offer also seems to be unique in private ownership, so we are very pleased to have it at our next auction.”