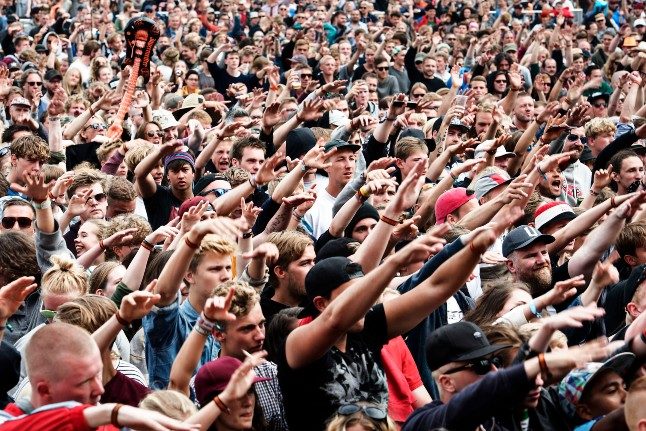 Crowds dance to House of Pain at the Roskilde festival in 2016. Photo: Scanpix

In a deal reached between the government and the eight parliamentary parties, concerts can only have a maximum of 2,000 spectators, divided into groups of 200, making it difficult to host a festival like Roskilde, which draws some 130,000 people.

The maximum audience will be increased to 5,000 from August 1st, and then to 10,000 only when “it is judged defensible from a public health point of view”.

For the Roskilde festival, which was scheduled to take place from June 26th, this was the last straw.

“We are devastated by the fact that we can’t get together at our festival and contribute to recreating the communities that the corona crisis has destroyed for so many,” the organisers wrote in a press release on Tuesday morning.

Those who have already bought tickets can either transfer them to next year’s festival or get a refund.

Other festivals which announced cancellations on Tuesday morning include the Northside, Smukfest, Tinderbox, Copenhell, Jelling, Vig, and Thy Rock festivals.

“It is a sad day today,” Ebsen Marcher, the head of Dansk Live, which promotes live music in Denmark, told the country’s state broadcaster DR.

“Of course we all knew very well that we would not be able to put on anything really big like we usually do, but we had then hoped that there would be an opportunity to do something a bit different. Now we are left with very, very few options, which is super annoying and very demotivating.”

Under the deal, the parties agreed to provide financial aid to help keep charities and companies organising festivals solvent until next year, something the organisers of Roskilde welcomed.

“It is a huge relief that the politicians are helping this summer’s cancelled festivals with financial aid packages. This aid is crucial for us. All our profits are donated in full to charitable work for children and young people, and we do not have large savings to draw on,” they wrote.

“We will meet again in 2022. And our community is strong! We can hardly even imagine how amazing it will be to reopen the festival at that time and meet again after such a long and sad absence.”