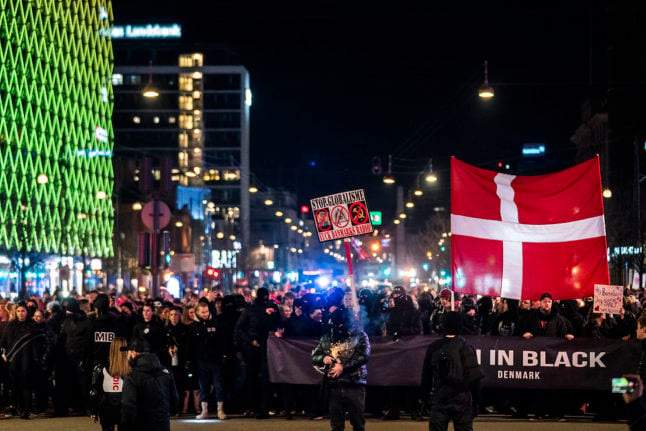 “I’m a fan of freedom!” says Anders, one of the thousand or so Danes demonstrating twice a month with the ‘Men in Black’ movement against Denmark’s Covid rules.

“The restrictions are ridiculous.”

At a recent Saturday protest, the 45-year-old plumber, who like other demonstrators refused to disclose his last name, said he had come out to defend his right to freedom of movement — with or without a facemask, a Covid test or vaccination.

But Anders told AFP: “We should be able to decide for ourselves.”

The pass shows that a person has either tested negative, recovered, or been vaccinated. It has been accepted by most Danes, who pay little attention to the protesters.

But about a thousand people have come out on this grey Saturday to express their frustration over the impact the Covid restrictions are having on their lives.

Many of them believe Covid is nothing more than a moderately contagious bad flu. The proof, they say, is that no one has ever fallen ill after one of their gatherings — though few of them ever get tested afterwards.

Vivian, a 29-year-old student and mother, had travelled from Aarhus to Copenhagen to join the demonstration.

“The restrictions have ruined mental health and businesses,” she said.

‘Men in Black’, created as a Facebook group in late 2020, has quickly grown into the most vocal anti-restrictions group in Denmark, usually better known for its quality of life than public uprisings.

To judge from those attending the marches most of the 23,000 members who joined the movement online appear to be young men, often clad in black sweatshirts, with shaven heads or balaclava masks, a can of beer in one hand.

They chant “Mette Ciao” — a reference to Prime Minister Mette Frederiksen — and “Freedom for Denmark”.

But there are also children marching, as well as a big heart-shaped glow stick and posters offering “Free Hugs”, adding a sense of cheer.

The first protests led to clashes with police, but since then the marches have generally unfolded peacefully.

“I like that we can see each other, we can hug,” says Ebsen, who had brought along his 12-year-old son who had been confined to home schooling for the past four months.

The demonstrators are a mix of conspiracy theorists, anti-vaxxers, libertarians and the general public.

While the movement did bar a notorious anti-Muslim activist from its protests, its members’ beliefs span the political spectrum.

Their distrust of established political parties renders any dialogue with politicians difficult — and contrasts sharply with Danes’ traditionally high level of trust in the authorities.

“What they share is a certain level of mistrust against government and mistrust towards production of knowledge,” says Eske Vinther Jensen, a consultant specialising in Covid-19 disinformation.

The list of ‘MIB’ complaints has grown since January, now ranging from facemasks to corona passes, vaccines and harsher penalties for infractions of Covid restrictions.

“Corona is a scam,” said Morten, who said he was one of the movement’s leaders.

His friend Dennis agreed. “Covid is an excuse to get people’s DNA in a database.”

The government was aggravating divisions in Denmark’s largely homogenous society with its corona passes, he argued.

“What they’re doing right now, it’s an A-side of society and a B-side… to divide the people, to make us weaker,” he said.

So what is the future for this movement, now that Denmark is opening up again after a partial lockdown?

“There is a small risk that the MIB movement could be converted into something more permanent,” said Danish crisis scholar Rasmus Dahlberg.

“But it will require stronger leadership, which we haven’t seen, and a clearer profile on what it is that they are protesting against.”

Vinther Jensen said the gatherings could lead to “a more inclusive public debate, including people we haven’t heard from before”.

“It is a great opportunity to try to understand what they are afraid of,” he said.

“If we think it’s only about corona I think we’re missing the point.”