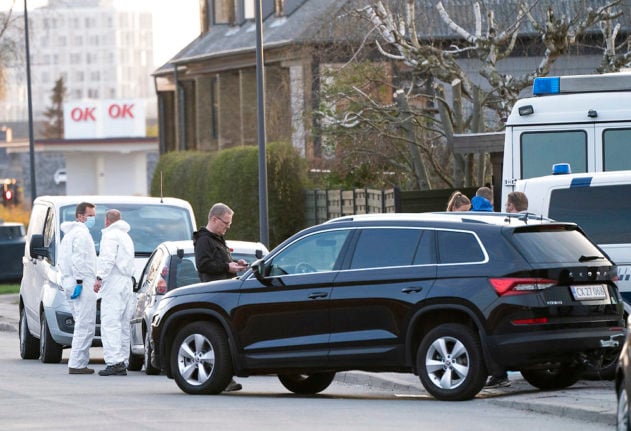 Police during the raid which uncovered over 200 kilograms of explosives near Copenhagen. Photo: Claus Bech/Ritzau Scanpix

A police raid on Sunday morning uncovered the stockpile, which law enforcement has described as “historic”.

Two men have been arrested following the raid and were scheduled to appear for preliminary court hearings in Copenhagen on Monday.

The men are aged 54 and 21, senior police officer Henrik Andersen said. The incident is being treated as “very serious”, according to Andersen.

“We have seized a historically large amount of explosives, which we obviously are relieved are no longer in criminal hands,” the officer said in a press statement.

“There was no imminent danger to neighbours of the location the explosives were stored, but you don’t have that kind of thing stocked up for fun,” he added.

The exact weight of the discovery is 206.4 kilograms.

The raid came as a result of a long-term investigation, according to police.

“Information that came into our hands a few days ago and which we have worked with intensively since” was a driver for the operation, Andersen told news wire Ritzau.

Police were seen in action in the Sundby area, just south of Copenhagen, on Sunday afternoon. A road was blocked off and military explosives technicians attended the scene.

But the explosives were found in a nearby shed, police said.

Investigation is being conducted by a special Copenhagen Police unit tasked with crime which crosses the Øresund straits separating Denmark and Sweden, Ritzau reports. The police unit deals particularly with crimes relating to weapons and explosives.

Police have not confirmed the extent of any Swedish involvement in the matter.

“There are indications that this could trace to Sweden but that is something we are working to clarify,” Andersen said.

Broadcaster DR has reported a link to biker gangs but no indication the explosives were to be used for terror purposes.