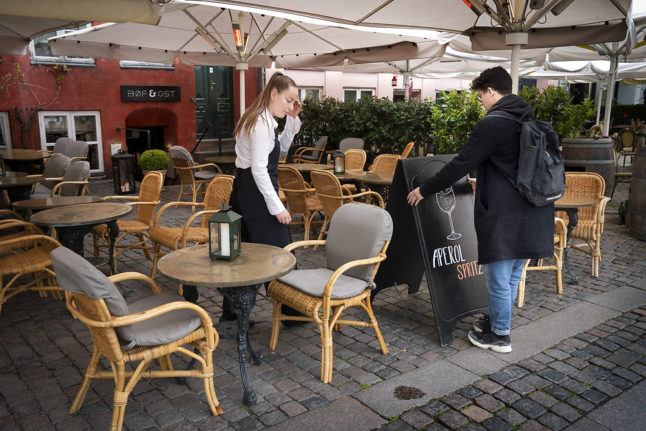 Additional coronavirus restrictions to be lifted next week

From next Wednesday it will be possible in Denmark to dine indoors at a restaurant with up to nine other people, provided you reserve a table and everyone has a valid corona passport.

That is because politicians late last night agreed on a deal to speed up Denmark’s schedule for lifting restrictions, in light of encouraging infection and hospitalisation data in the country.

The deal also further opens schools and will allow some spectators at football matches. We’ll have the details in an article on our website today.

The Liberal (Venstre) party, currently the largest opposition party and the party of two of the last four prime ministers (Lars Løkke Rasmussen and Anders Fogh Rasmussen), is in danger of losing its status as Denmark’s senior conservative group in parliament, according to an Epinion poll conducted for broadcaster DR.

The poll found that the Liberals now have just 10.4 percent of the support of voters, a collapse compared to the 23.4 percent share it took at the 2019 general election.

That leaves them well short of the Conservative party, which has seen its support grow to 15.5 percent in the latest poll, up from 6.6 percent in 2019.

The Liberals have lost arguably their two biggest profiles this year, with Løkke Rasmussen breaking away to form his own centrist party and hardline former immigration minister Inger Støjberg handing in her membership in the fallout over her upcoming impeachment trial.

Ministers to answer questions over Danish children in Syrian camps

The defence and foreign ministers, Trine Bramsen and Jeppe Kofod, will today answer questions from the other parties over the conditions in the Kurdish-controlled prison camps Al-Hol and Al-Roj in northeastern Syria, wear former Islamic State (Isis) militants and their familes are held. At least 19 children with Danish nationality or the right to Danish nationality are known to be in either of the camps.

The ministers are to answer questions on the threat posed to Denmark by the flight risk of extremists at the camp, and the risk children will be abducted and indoctrinated, broadcaster DR reports.

The government has been pressured by sections of the public and parliament to extract the children and their mothers from the camps, but the issue divides opinion.

You can read more about this here.

Three Iranians to go on trial on terror charges

Three leaders of an Iranian Arab separatist group will go on trial in Denmark on April 29th accused of financing and promoting terrorism in Iran with Saudi Arabia’s backing, Danish prosecutors said yesterday.

“Three leaders of the ASMLA (Arab Struggle Movement for the Liberation of Ahvaz) are accused of financing and promoting terrorism in Iran in cooperation with a Saudi intelligence service,” the Danish prosecution service said in a statement, reported by the AFP news wire.

The case is to be heard at Roskilde District Court and the Iranians risk 12 years in prison if found guilty.