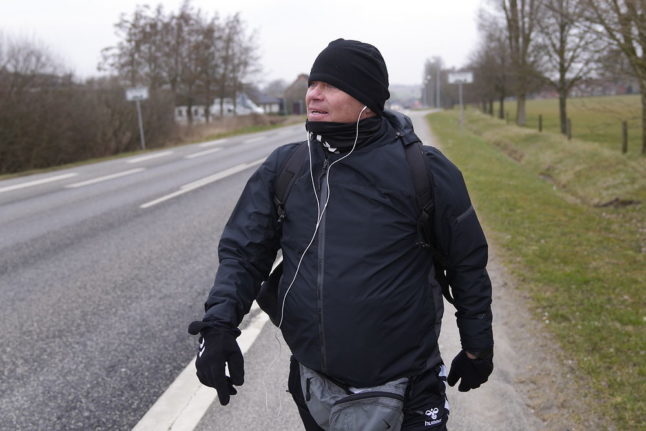 Stig Tøfting, a former player with Denmark's national football team, walks from Aarhus to the border with Germany after losing a bet. Photo: Frank Cilius/Ritzau Scanpix

Prime Minister Mette Frederiksen said for the first time yesterday that the government could act to repatriate 19 children who are Danish nationals from prison camps in northeastern Syria.

The camps, al-Hol and al-Roj, house former militants and supporters of the Islamic State (Isis) terror groups. The children are ostensibly in the camps because their mothers travelled to Syria in support of Isis.

Until now, the government has refused to extract the children from the camps, primarily citing security reasons, although its own intelligence service has said leaving them in Syria poses more of a potential security risk to Denmark than repatriating them.

But the position now appears to be changing. Newspaper BT reported yesterday that the PM was now open to bringing the children to Denmark after meeting with leaders of allied left-wing parties. That came after pressure increased on the government following reporting by another newspaper, Ekstra Bladet, which has shown the children are at risk of radicalisation in the camps. The foreign minister, Jeppe Kofod, has faced increasing criticism over the government’s lack of transparency on security reports related to the matter.

Practical elements of how the children might be repatriated remain to be clarified, as does a position on what might happen to their mothers, who would likely face prosecution in Denmark if they returned to the country.

The foreign ministry on Tuesday summoned China’s ambassador after Beijing sanctioned an organisation founded by a former Danish prime minister in retaliation for EU measures over the crackdown on the Uyghurs.

A list of organisations banned by China included the non-profit Alliance of Democracies, founded by Anders Fogh Rasmussen, who served as Denmark’s prime minister between 2001 and 2009 after which he became Secretary General of NATO.

Here’s more detail on that story.

What next after announcement of reopening plan?

Earlier this week, Denmark announced a plan to lift many of its current coronavirus restrictions by the end of May, but the future of some of the current rules remains unclear.

In this article, we outline some of the current restrictions which do not yet have a schedule for being fully lifted, including those relating to travel and public assembly.

The government has said it hopes to reopen most of society once everyone over 50 years old has been vaccinated. ‘Corona passports’ are to play a key part in the lifting of restrictions. But how will they work and be enforced? We have more on that here.

An increased vaccine delivery from Pfizer/BioNTech has enabled the Greater Copenhagen health authority to unlock 40,000 vaccination slots, broadcaster DR reports. The vaccinations will be given during the next four weeks.

The region is now vaccinating people aged 75 and upwards.

Latest national figures show around 11 percent of the population to have received a first dose of a Covid-19 vaccine.

He was known for his tough tackling and intimidating style in his playing days, so few opponents would describe ex-footballer Stig Tøfting as ‘pedestrian’. At least, not to his face.

But the former midfielder, who represented Denmark at the 2002 World Cup, began walking 167 kilometres from Aarhus to the border with Germany this week after losing a bet, according to broadcaster TV2.

‘Tøffe’, as he is affectionately known, will be raising money for children’s cancer charities during his long walk.