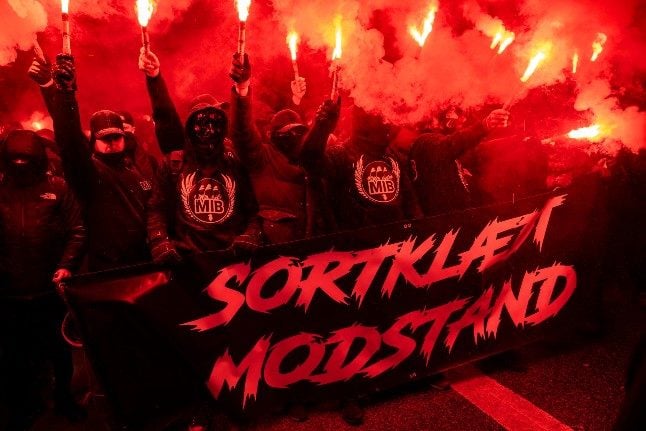 Protesters held flares out on the streets on Copenhagen on Saturday night. Photo: Philip Davali/Ritzau Scanpix

One person was arrested for throwing fireworks at police during the Saturday march, while another was detained over violent behaviour, the police told AFP.

The rally was organised by a group calling itself “Men in Black Denmark” which has called regular demonstrations since the end of last year against what it calls the “dictatorship” of the country’s Covid-19 restrictions.

Walking through firework smoke, the protesters held torches as they moved through the city centre chanting “Freedom for Denmark” and “Mette Ciao,” a reference to Prime Minister Mette Frederiksen.

Local media reported that the march took place in a “sometimes intense” atmosphere, but without major incident.

The protest came a day after a 30-year-old woman was sentenced to two years in jail for calling for violence during a previous “Men in Black Denmark” rally against Covid-19 restrictions in January.

The case provoked a debate about the sentence which commentators deemed unusually harsh for her at times ambiguous comments.

“Are you ready to walk around and smash the city in a non-violent way?” she had told the crowd during an impromptu speech.

Her sentence was originally set to one year, but the court also invoked a law passed at the end of 2020 that allowed the sentence to be doubled since “it had a background in and was connected to the Covid-19 epidemic”.

Denmark, which has been under a partial lockdown since late December, announced late February that it would ease some restrictions.

However, it extended many of them until April 5, including the closure of bars, restaurants (except take-away), and most secondary and higher education establishments.