Five people were arrested in Copenhagen on Saturday night after demonstrations against the country's coronavirus restrictions turned violent, resulting with a puppet of the Danish Prime Minister being set on fire, police and local media said.

Around 1000 people had gathered in Copenhagen, according to the Danish newspaper B.T.

Organised by a group calling itself “Men in Black”, the demonstrations targeted restrictions imposed to curb the spread of the coronavirus.

Protestors shouted “freedom for Denmark” and “we have had enough” according to DR's reporter Caroline Clante.

After a peaceful start, the protest later turned violent. In TV broadcasts and video posted to social media, police in riot gear could be seen clashing with protesters in Copenhagen.

The five people have been questioned and released without being brought before a judge, head of security Michael Andersen at the Copenhagen Police said on Sunday morning. Three have been charged with with violence or threats of violence against an official.

During the demonstration, a life-size doll representing Prime Minister Mette Frederiksen was hung on a lamppost on Julius Thomsens Plads by Forum in Frederiksberg.

Around the neck of the dull hung a sign saying, 'hun må og skal aflives!” – 'She must and should be killed.'

The puppet was later set on fire, which has sparked outrage among several party leaders and politicians from both wings.

Copenhagen Police said on Sunday morning that the burning of the doll is being investigated and there may be further arrests. 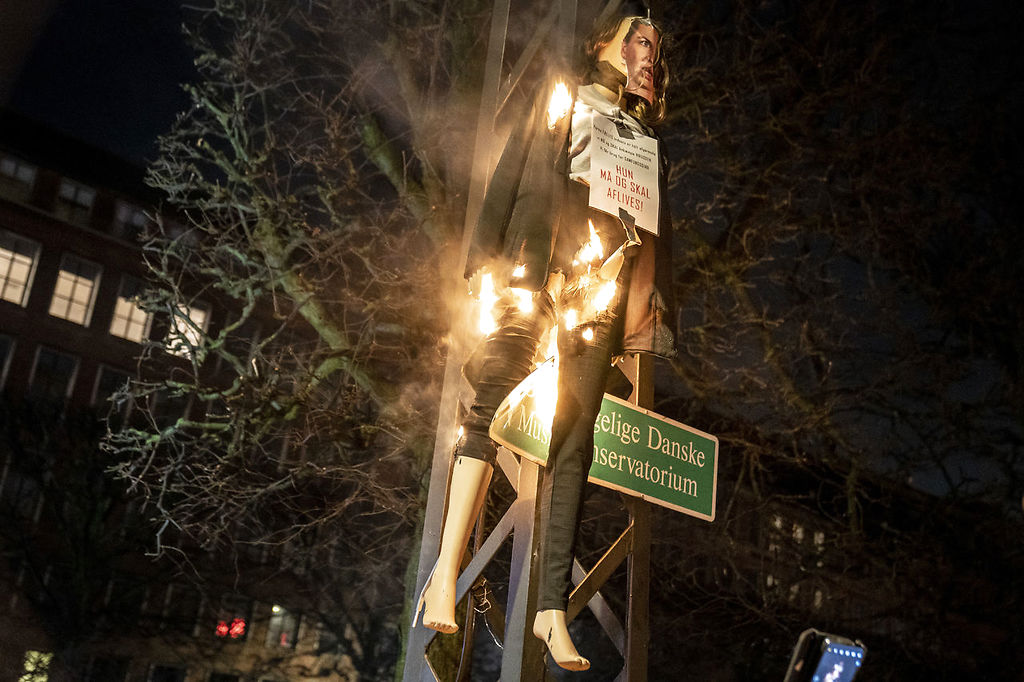 On the Facebook event for the demonstration, “Men in Black” had stressed that a peaceful demonstration was expected.

“We lack a long-term plan and strategy! We need to be presented with alternative solutions for a complete lockdown,”the group wrote on the event page.

The demonstration began at Forum Station in Frederiksberg shortly after 6 pm. After this, it continued towards the centre.

At approximately 7.15 pm, the group reached Forum Station, where they remained until the police broke up the protest at around 11pm.

“Men in Black” has previously arranged demonstrations in Aalborg and Copenhagen, which ended with riots and several arrests.

The most recent took place on January 9, when a total of 23 people were arrested and seven people were later remanded in custody.

Also on 19 December, the group arranged a demonstration in Copenhagen. Here, the participants committed extensive vandalism including repainting house walls and shop windows with graffiti.