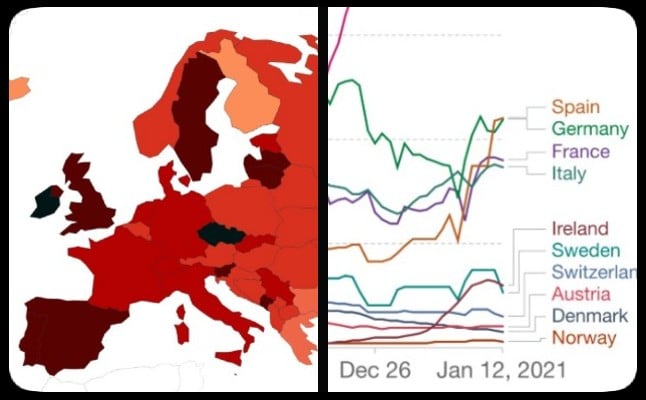 Image Our World in Data

The Americas in December again overtook Europe as the region of the world most affected by the Covid-19 pandemic, after tougher restrictions brought in in November and December slowed the virus.

Health officials have now recorded close to 30m cases across Europe, compared to close to 40m cases in The Americas, according to the World Health Organisation's Covid-19 dashboard.

These charts from Our World in Data on January 13th shed some light on which countries in Europe have been the worst hit during the second wave of the virus, and which have most successfully managed to bring the pandemic back under control.

The chart below shows a rolling seven-day average for new Covid-19 infections.

The obvious change over the last month has been the surge in daily new confirmed cases in the UK. If this is due to the new, more contagious, B.1.1.7 variant, then other European countries risk seeing a similar rise.

Germany, which was one of the world's success stories in the first wave, saw its cases climb rapidly in October, hitting a plateau before climbing again at the start of December.

Germany's second wave, however, has still been much more muted than those of France, Spain and Italy, which all saw the number of new cases spike sharply in October and November, before falling again in November and most of December.

Sweden's second wave began late, only picking up speed towards the end of October, but the daily number of new cases rose steadily until just before Christmas.

Denmark saw rising infections throughout October with ever tightening restrictions to match them.

Norway has largely managed to keep numbers low throughout the pandemic

Spain, France, Italy and Germany have all seen the number of new cases rising rapidly since January 10th, suggesting  that there was higher spread over the Christmas period.

To see how changes in restrictions have fed in to the fluctuating infection rates look at the last chart below. 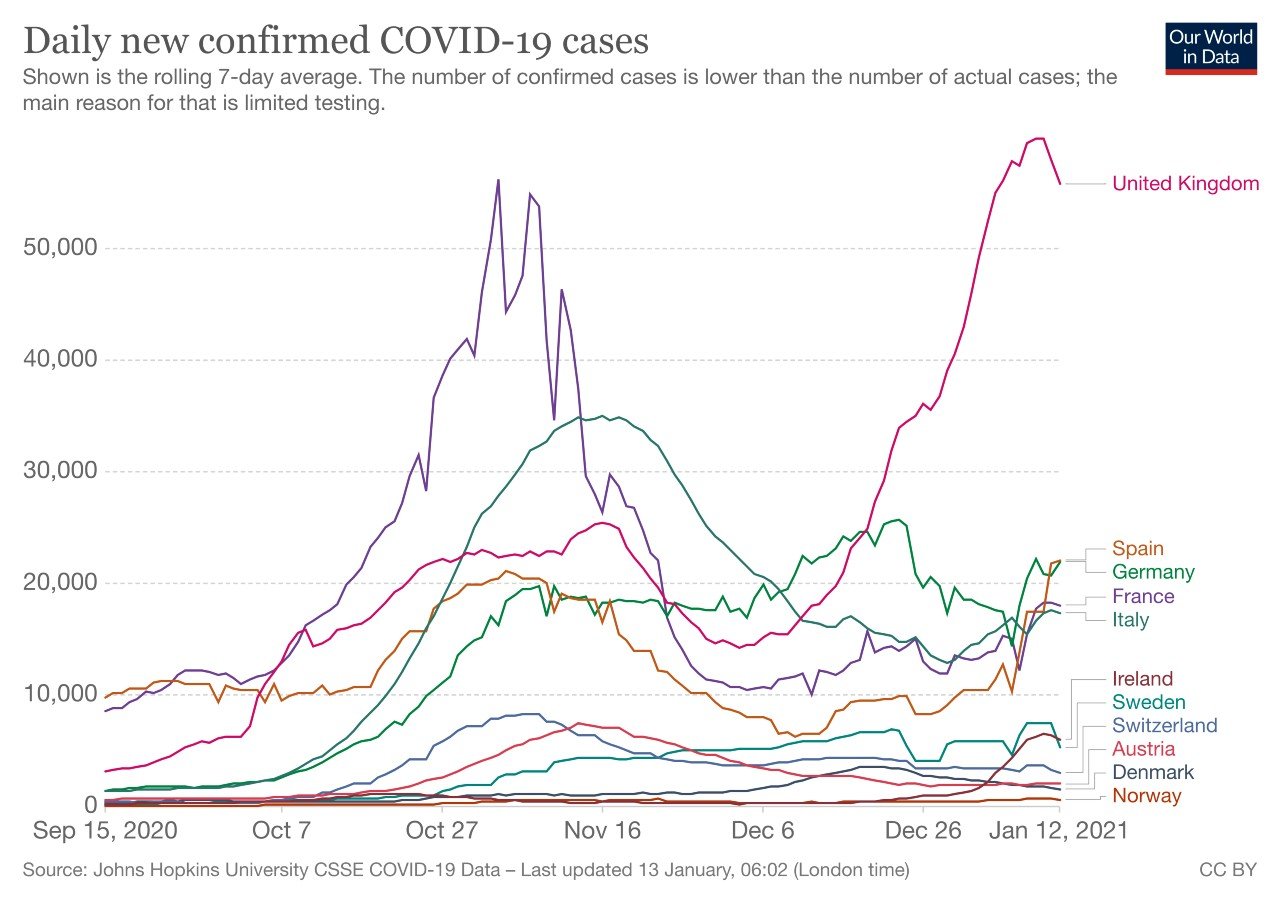 When the infection rate is compared to the size of population the chart looks slightly different.

Apart from Ireland and the UK, it is Sweden and Spain which have Europe's current highest rates of infection per million people over the last seven days, while France and Germany have lower incidence rates. Norway's has seen a slight rise in recent days before falling again. Switzerland's rate has been falling 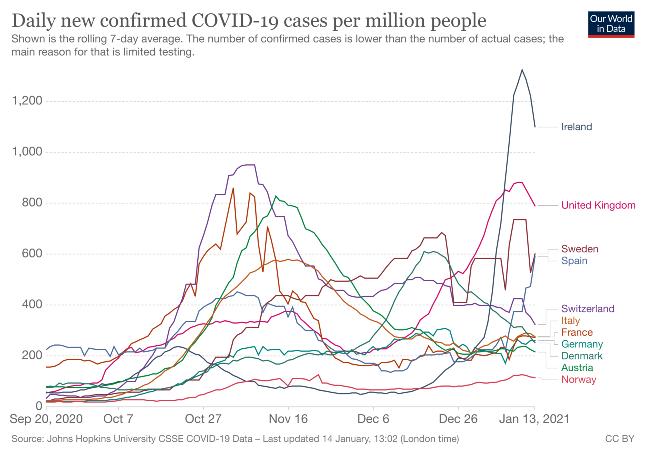 And the chart looks like this in map form with Sweden and Spain standing out with their higher rates of infection than most of Europe when compared to size of population. Ireland and the Czech Republic have the highest rates. 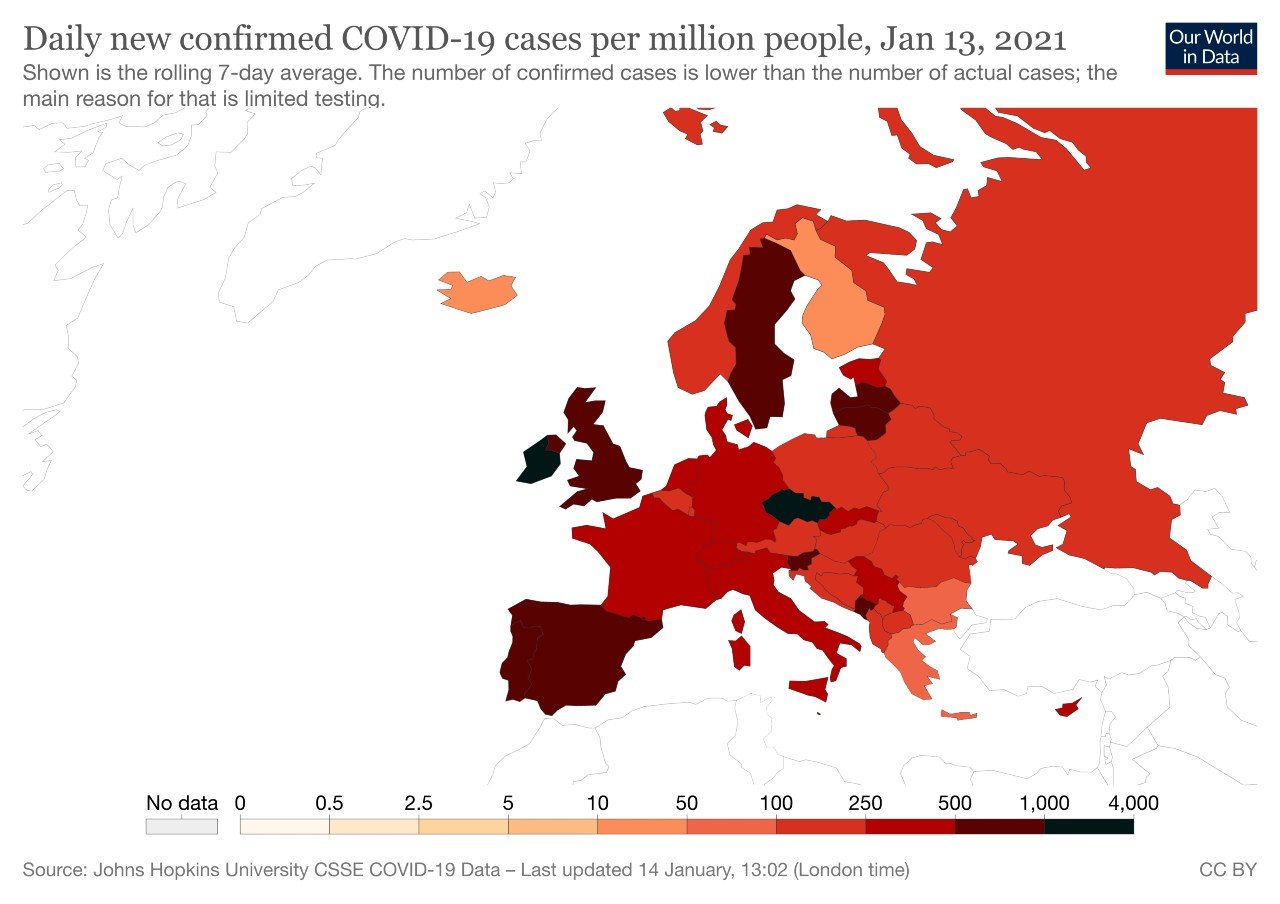 France has by the far highest number of confirmed Covid-19 cases of the countries covered by The Local, although the soaring rates in the UK pushed it ahead at the end of December.

Much, however, depends on testing policies and capacity. In all countries the number of confirmed cases is lower than actual cases due to limits in testing capabilities. 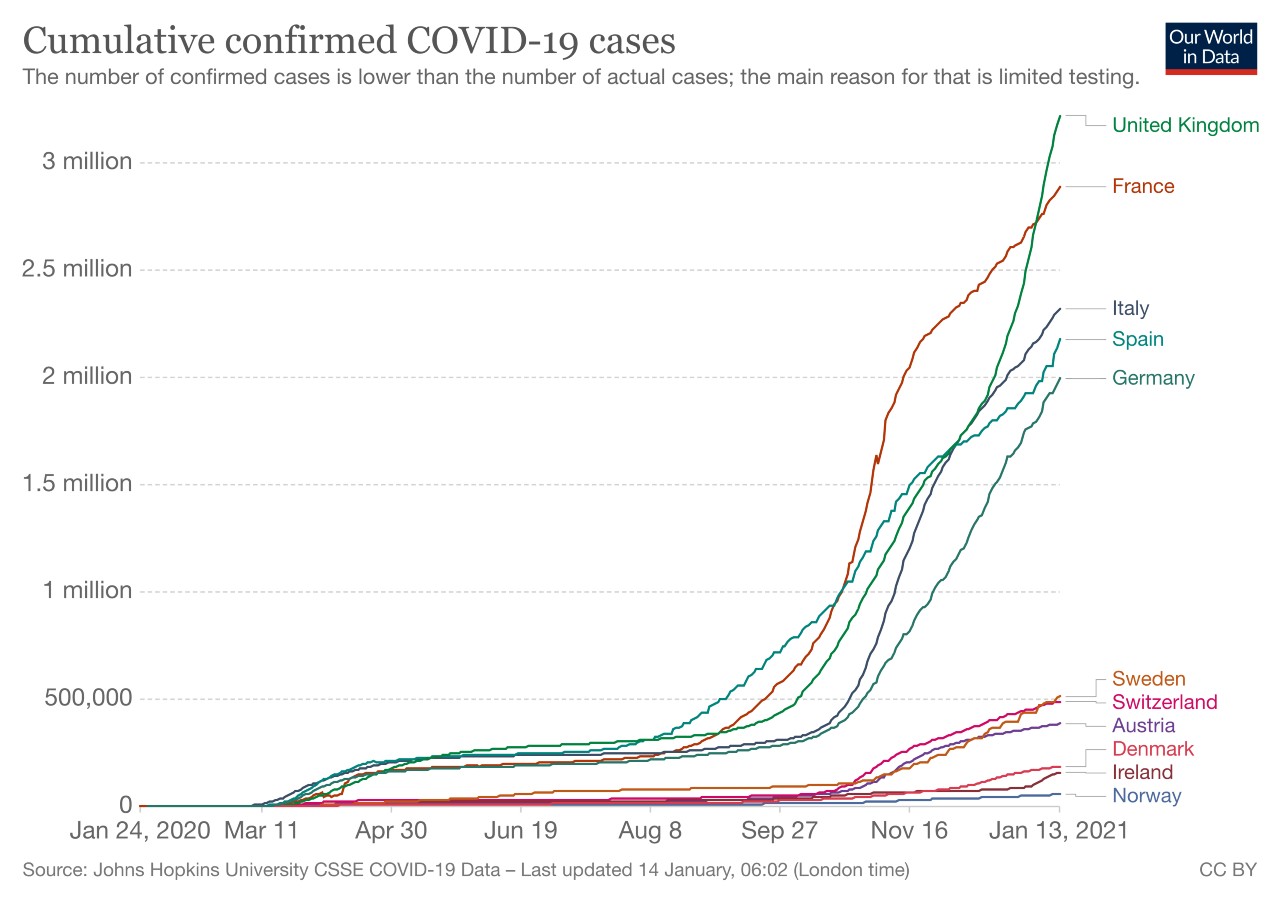 3. The change in infections over the last two weeks

This chart shows the change over the last two weeks in the number of confirmed infections. So those countries coloured blue are where the pandemic is receding, with the darker the shade reflecting the bigger drop in infections.

Those in shades of red are where infections have increased over the last 14 days.

Here you can see very clearly the sharp rise in cases seen in Spain, Portugal and Ireland after the festive season. 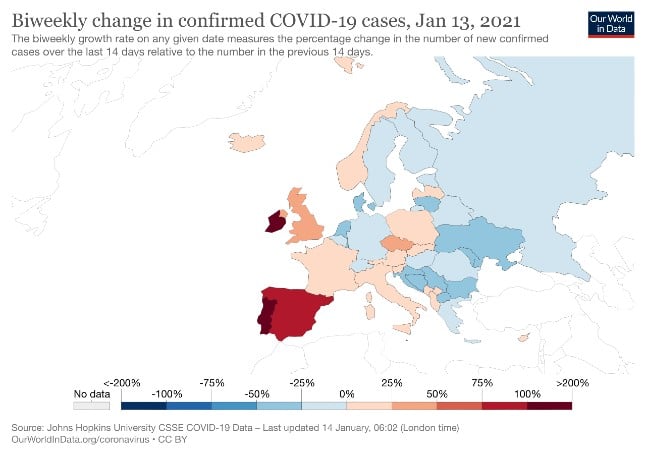 This chart shows the countries currently suffering the highest death rates over the last seven days with the UK far ahead of other countries with an average of over 1,000 a day.

Germany has also seen deaths spike to over 800 a day. 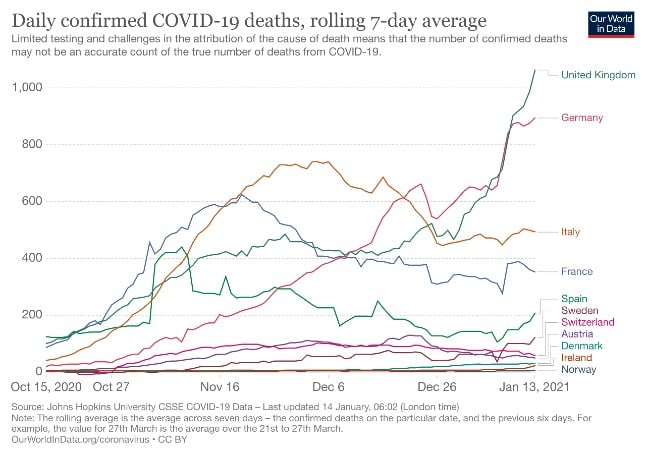 The following chart shows the daily death rate when the size of population is taken into account.

Here Sweden's high per capita death rate is clearly visible, spiking in the second half of December, then dropping over Christmas only to spike again in recent days. 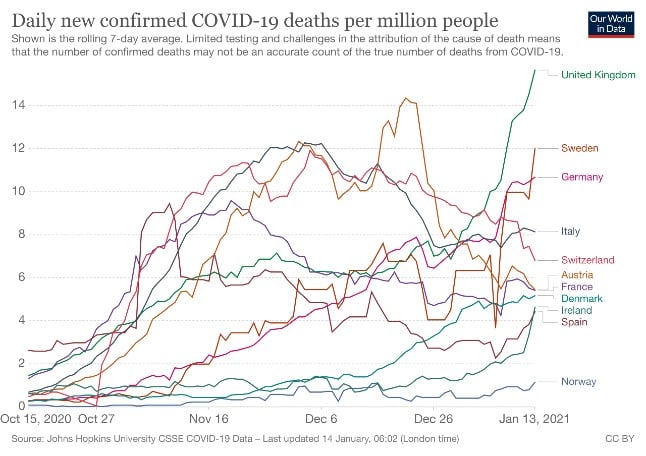 This chart shows the countries with the highest death tolls linked to the Covid-19 virus. However as the chart notes, testing and different ways of attributing the cause of death means the number of confirmed deaths may not be an accurate count of the true number of deaths from Covid-19.

The UK and Italy have both suffered over 80,000 deaths linked to the virus, while France is nearing the 70,000 mark.

The number of deaths in Denmark and Norway remain low in comparison. 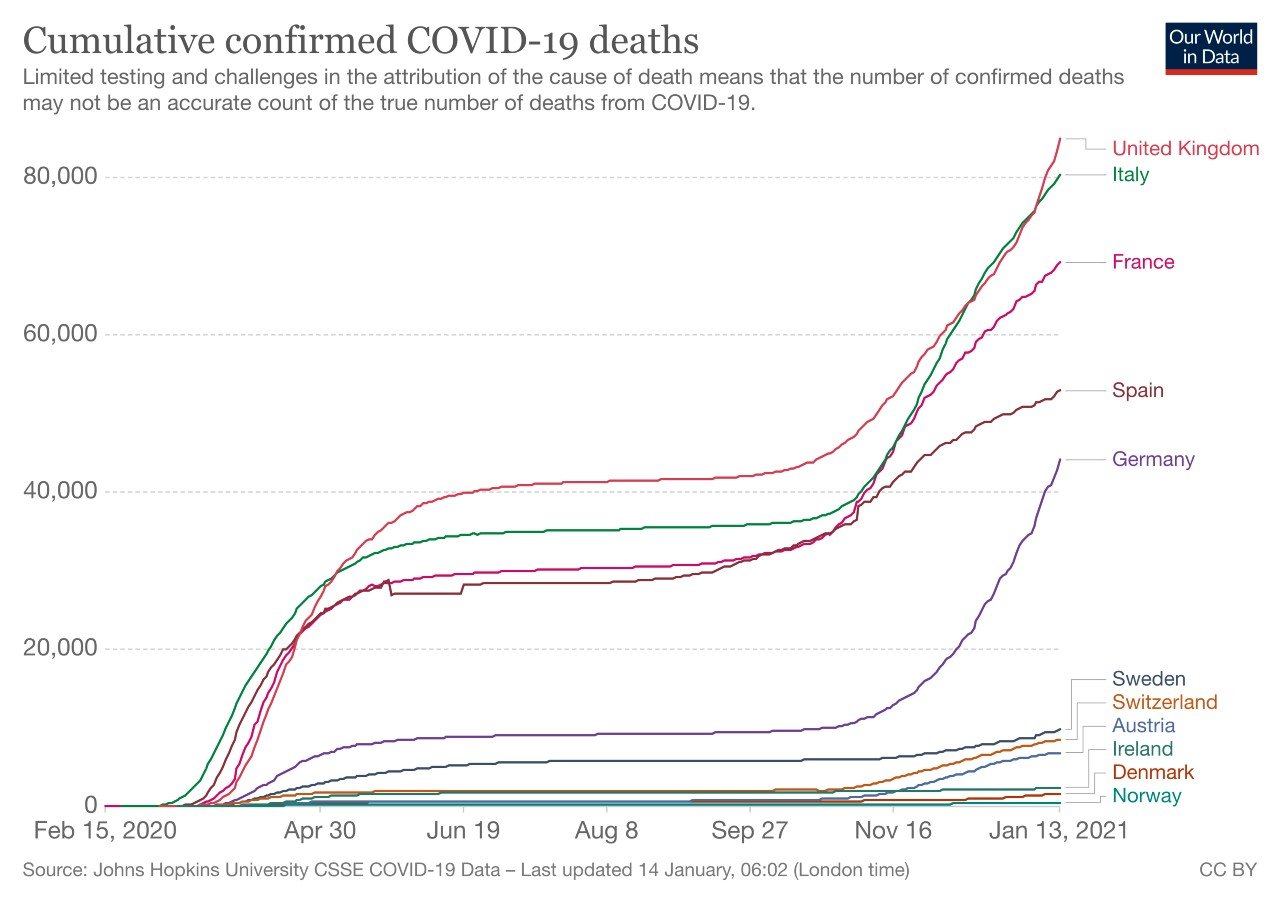 This chart shows how the spike in mortality rates compare to the first wave of the pandemic in the spring.

Here Austria, Germany, Switzerland and Denmark stand out as countries where the second wave has been much more severe than the first.

Spain, in contrast, has so far had a relatively mild second wave after suffering the most severe first wave in Europe. 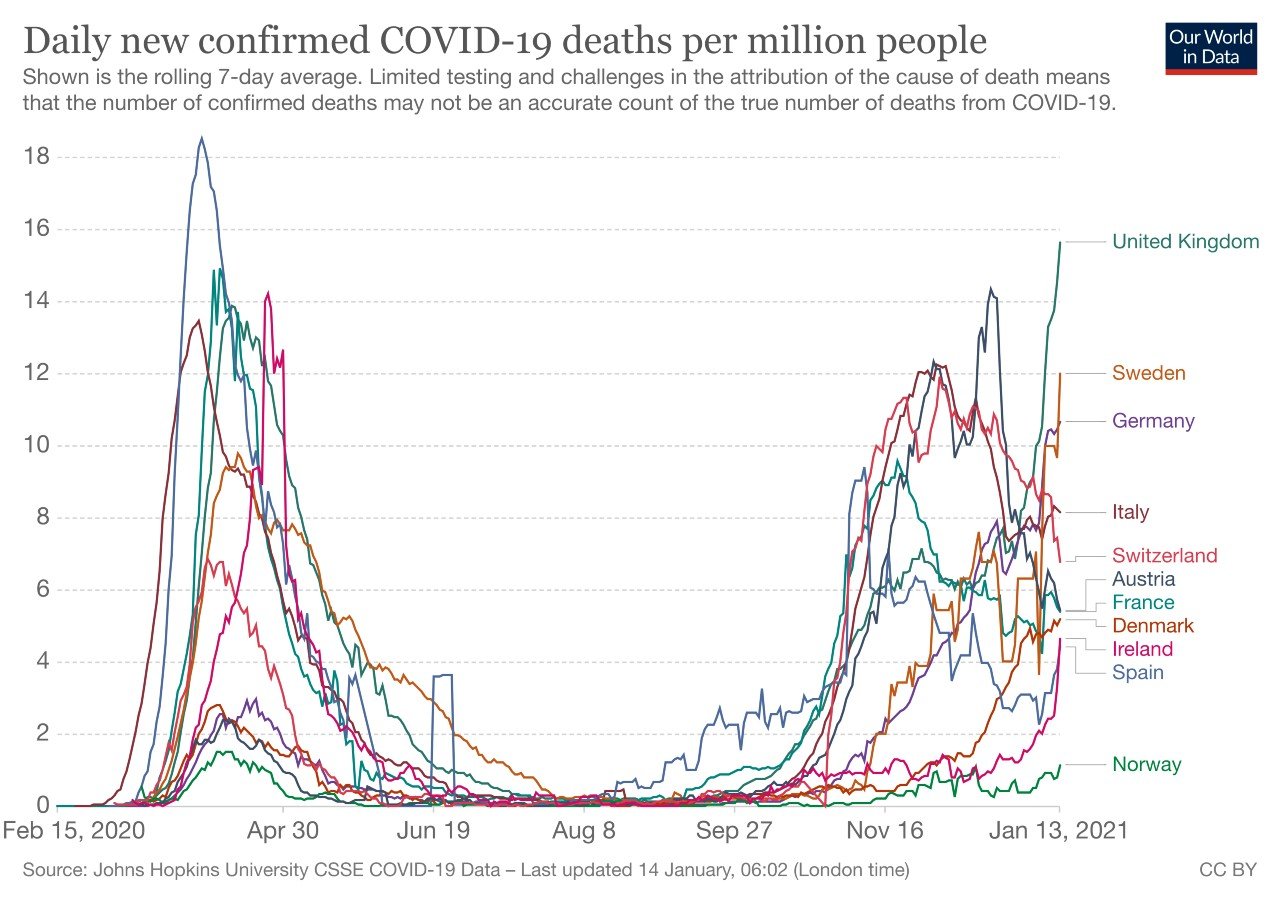 This chart looks at how different countries square up when it comes to testing the population for Covid-19. Denmark is far ahead of other countries based on the number of tests carried out per thousand people.

You can see a spike before Christmas when Danes got themselves tested so they could more safely see relatives. 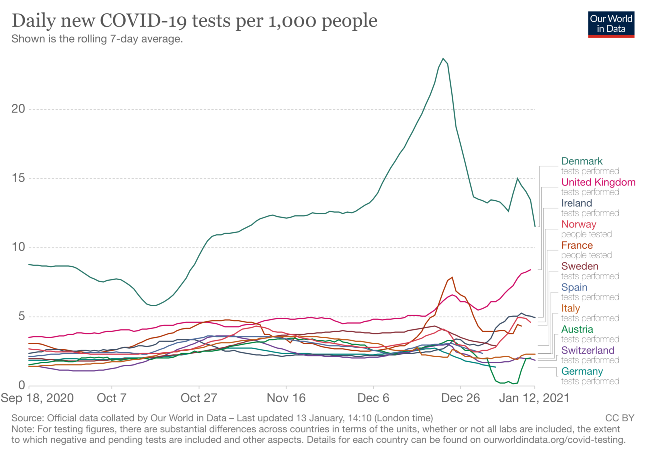 The map and chart below show the positivity rates of tests in the past week. Ireland, Sweden, and Germany have had some of the highest shares of tests that are positive. 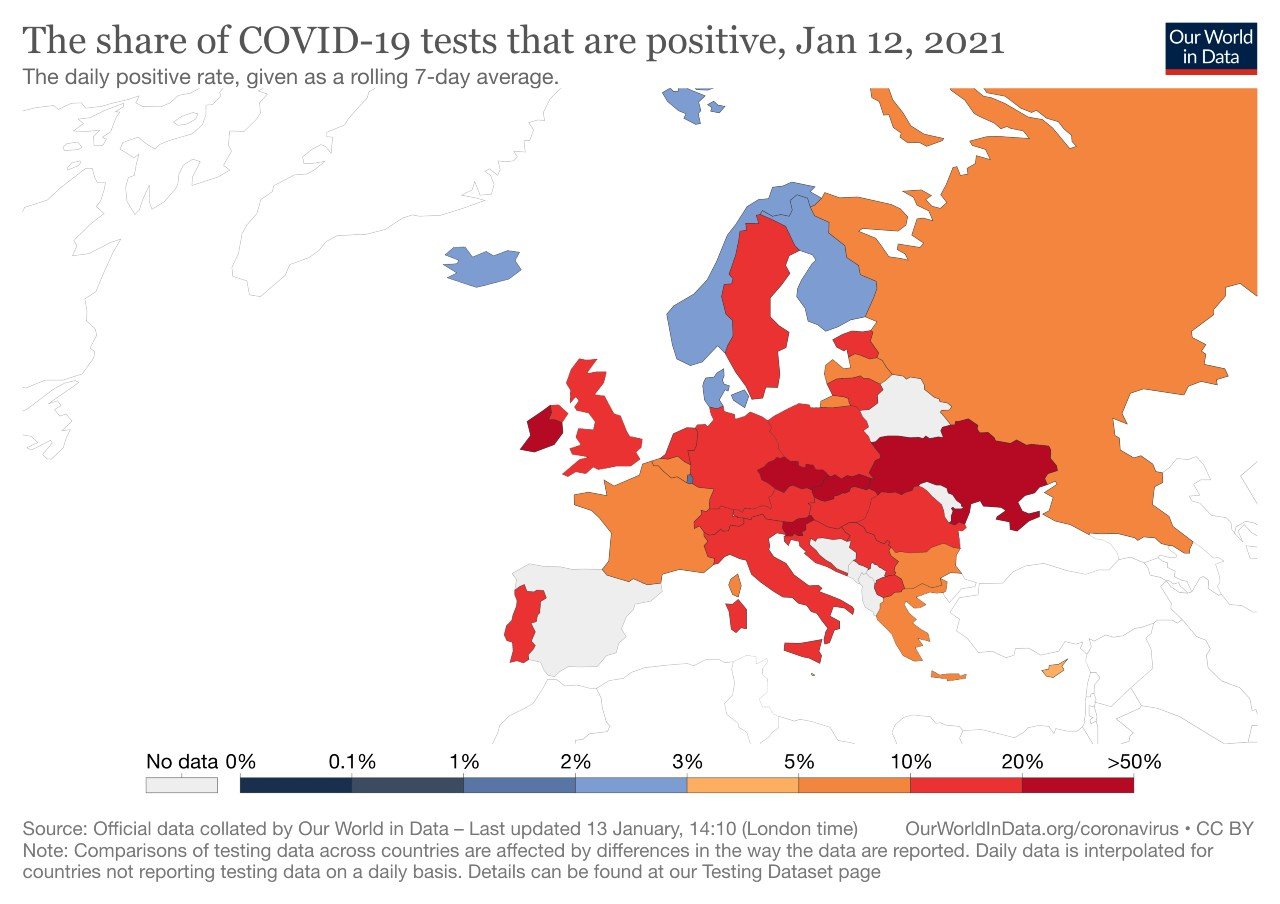 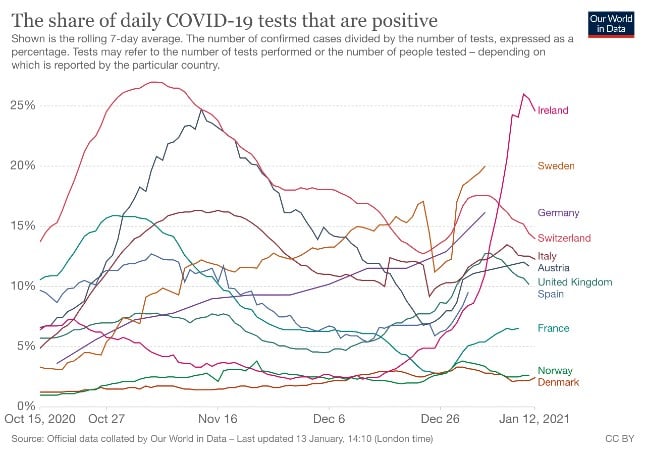 9. How strict are governments?

All the graphs above very much depend on the strategies of each government and the restrictions they have imposed. Spikes are often followed by lockdowns which have resulted in rates dropping.

The Local has been reporting over recent days and weeks government measures are changing constantly as infection rates climb, fall or plateau.

Sweden, and to a lesser extent Germany, are the only countries to have tighter restrictions in place today than they had at the peak of the first wave in the spring.

Most countries in Europe have sought to avoid going back into a full or partial second (and third) lockdowns, although in recent weeks, the UK, Ireland, Denmark and Italy have more or less done so.

Germany ordered restaurants, leisure facilities and cultural sites to close at the start of November, following a rise in infections, and then in mid-December closed schools, non-essential shops and hairdressers, as the number of infections started to rise again. The country is still under tight restrictions and may be for a few weeks yet, according to Chancellor Angela Merkel.

The restrictions France brought in at the end of September did little to arrest the sharp rise in cases, pushing the country to enter a second lockdown at the start of November, which was more successful.
France ended its lockdown on December 15th and replaced it with a nighttime curfew. However with cases plateauing at the 20,000 a day mark, the government was set to tighten restrictions even further.

Italy tightened restrictions at the start of November but stopped short of imposing a full lockdown until the end of December, when there were three consecutive mini lockdowns from December 24-27th, December 31st-January 3rd, and again on January 5-6th.

But on January 14th, with cases rising, Italy announced that new restrictions would be put in place including regional travel bans and limits on house guests.

Spain launched a partial lockdown in Madrid at the start of October, followed by tightened restrictions in other regions.

A State of Alarm was imposed nationally on October 26th, which included a national curfew from 11pm.

In the first few weeks of November, most regions closed bars and restaurants, causing new infections to fall steadily for the rest of the month.

By mid-January with a cases rising rapidly, Spanish regions were tightening restrictions whilst some officials were calling for a new national lockdown.

Switzerland initially had one of the most relaxed approaches to the second wave, keeping bars and restaurants open as the number of new cases rose steadily through October.

This changed on October 28th, when the government announced sweeping new restrictions which were then followed by tighter restrictions in most cantons.

Switzerland has just extended its restrictions and tightened them once again with the closure of all non-essential shops.

Sweden in October and November brought in ever tighter recommendations, which had only a limited impact, perhaps because most were not backed by fines or other sanctions.

It was only at the start of this month that a new pandemic law has meant some restrictions are backed by fines.

Denmark brought in a significant tightening at the end of October, and a partial lockdown at the start of December. The emergence of new variants has persuaded the Danish government to extend the current lockdown into February.

Austria has imposed a lockdown until January 25th, which has seen schools and nn-essential shops closed as well as stay-at-home orders for the pubic. The government has warned it maybe extended beyond that date.

On January 4th Norway's government introduced new restrictions after a rise in cases. The measures included a national ban on serving alcohol at all businesses and events.

The best place to keep up to date with all of the latest restrictions and rules across Europe is via The Local's nine individual country sites in Sweden, Norway, Denmark, France, Germany, Italy, Spain, Switzerland and Austria as well as our Europe site.

The chart below attempts to show just how strict government measures have been in different countries.

Our World in Data says: “The chart here shows how governmental response has changed over time. It shows the Government Stringency Index – a composite measure of the strictness of policy responses.”

The index looks at measures including school and workplace closures, restrictions on public gatherings, transport restrictions and stay-at-home requirements and gives a score out of 100. 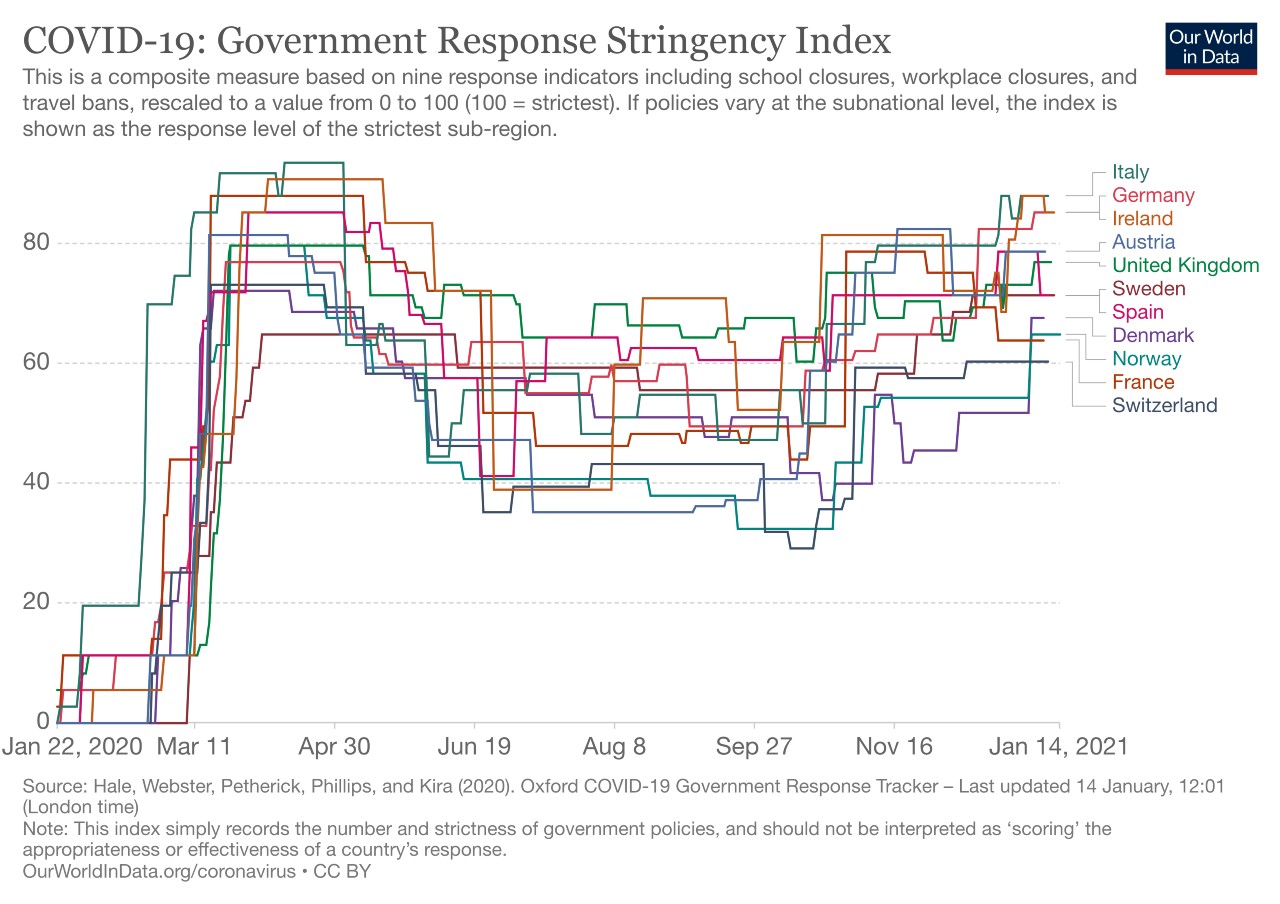