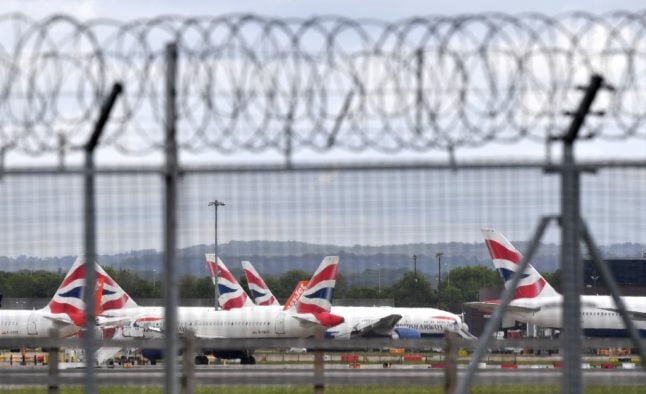 France on Sunday halted all travel from Britain for 48 hours from midnight, including journeys “related to goods transport by road, air, sea or rail”.

The ban on everything but unaccompanied freight comes as companies scramble to shift merchandise across the Channel with days to go until Britain leaves the EU trade bloc.

Prime Minister Jean Castex's office said the 48-hour period would offer time to coordinate a joint EU response that would ultimately allow travel from the UK to resume “with compulsory testing on departure”.

READ MORE: France's UK travel ban – who is affected and what happens next?

Germany halted all air links with the UK from midnight on Sunday, with the ban initially slated to last until December 31, Health Minister Jens Spahn told ARD public television.

Cargo flights will be exempt.

A government source told AFP that Berlin is already “working on measures” to extend the suspension into January, when the end of Britain's post-Brexit transition period means it will no longer be covered by EU rules that enable the flight ban.

On Sunday Italian Health Minister Roberto Speranza said that he had signed a decree “which blocks flights from Great Britain and prohibits entry into Italy of people who have stayed there during the last 14 days”.

Anyone in Italy who recently travelled from Britain must be tested, the statement added.

The new strain has been found in one person in Italy who recently returned from the UK.

EXPLAINED: What you need to know about Italy’s UK coronavirus travel ban

Sweden will join a growing list of countries to ban travel from the UK over concerns of a new Covid strain, the Swedish government confirmed on Sunday.

The Swedish government is expected to formally make the decision on Monday, but Interior Minister Mikael Damberg confirmed to public broadcaster SVT that it will “come into force as soon as possible”.

The Austria Health Ministry announced on Sunday that it will ban flights from the UK from landing at its airports after a more infectious mutation of the coronavirus was detected in Britain.

The ministry told the APA news agency that it was planning a ban, but details on when it will come into force and how low it will last for are yet to be announced.

All passenger flights from the United Kingdom to Denmark have been temporarily suspended due to the discovery of a faster-spreading variant of Covid-19.

Denmark will ban incoming flights from the UK for an initial 48 hours, effective at 10am on Monday.

The decision was made to prevent a new strain of Covid-19 found in the UK from spreading, health minister Magnus Heunicke stated on Twitter.

All passenger flights from the United Kingdom to Norway have been temporarily suspended with immediate effect due to the discovery of a faster-spreading variant of Covid-19.

The measure is effective for an initial two days but can be extended, NRK reports.

A number of other restrictions are to be placed on travellers arriving in Norway from the UK.

Health minister Bent Høie said that authorities in the Nordic countries have begun contacting persons who have travelled to Norway from the UK during the last 14 days. SMS messages have been sent to relevant persons, according to the minister.

READ ALSO: These are Norway's rules for recent arrivals from the UK

South Africa is also included in the ban, as the new virus variant is spreading through that country as well.

“The new strain is significantly more contagious than the known kind,” FOCA said in a press release on Sunday.

Spain and Portugal on Monday decided to join other countries in suspending flights from the UK due to fears over the new Covid-19 strain.

In a statement issued on Monday afternoon, the Spanish government announced its decision to ban flights from the UK.

Flights will be suspended from Tuesday, December 22nd. Only Spanish citizens and those resident in Spain will be allowed to enter the country.

Dublin said in a statement that all flights arriving from Britain from midnight Sunday would be banned for at least 48 hours.

All passenger flights from Britain to the Netherlands have been banned until January 1, the Dutch government said.

One case of the new strain has been found in the country, the health ministry added.

Norway was set to make a decision on whether to ban travel links to the UK on Monday.

Elsewhere in Europe, Belgium banned flights from the UK for 24 hours and Finland barred flights for two weeks

Estonia, Latvia and Lithuania have halted flights from the UK.

Bulgaria said flights to and from Britain would be suspended from midnight Sunday until January 31.

Romania has banned all flights to and from the UK for two weeks, beginning on Monday afternoon.

The move follows a crippling 15-day pilot strike, also in July, that cost the carrier between $9 and $12 million a day.

The pilots were protesting against salary cuts demanded by management as part of a restructuring plan aimed at ensuring the survival of the company.

SAS said it has entered “into a debtor-in-possession (DIP) financing credit agreement for $700 million with funds managed by Apollo Global Management”.

SAS had filed for Chapter 11 bankruptcy protection in the United States and said the “DIP financing, along with cash generated from the company’s ongoing operations, enables SAS to continue meeting its obligations throughout the chapter 11 process”.

“With this financing, we will have a strong financial position to continue supporting our ongoing operations throughout our voluntary restructuring process in the US,” SAS board chairman Carsten Dilling said.

SAS management announced in February the savings plan to cut costs by 7.5 billion Swedish kronor ($700 million), dubbed “SAS Forward”, which was supplemented in June by a plan to increase capital by nearly one billion euros ($1.04 billion).

Denmark and Sweden are the biggest shareholders with 21.8 percent each.

“We can now focus entirely on accelerating the implementation our SAS FORWARD plan, and to continue our more than 75-year legacy of being the leading airline in Scandinavia.”

SAS employs around 7,000 people, mainly in Denmark, Norway and Sweden. It has suffered a string of losses since the start of the coronavirus pandemic in early 2020.