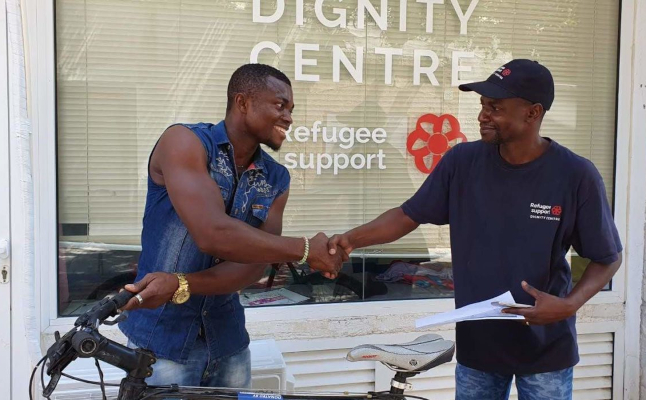 This article is part of Changing the Narrative. Articles in this series are written by student or early career journalists who took part in The Local's training course on solutions-focused migration reporting. Find out more about the project here.

When the Cypriot government announced strict Covid-19 restrictions at the end of March 2020, Rodrigue Ndiane who is from Cameroon and arrived in Cyprus in September 2019, was forced to isolate in a three-square-metre room with five tenants who shared the same space.

The restaurant in Limassol where Ndiane worked shut its doors, and he lost his job.

All grocery stores had to shut down, and migrants with no working contracts were not able to receive proper support from the government but were forced into quarantine, which made it difficult for them to buy food or other necessary items. The coupons issued by the welfare service could only be exchanged at a specific shop: 1.5 hours away by bus.

“Given that we were only allowed two hours a day to comply with our daily needs, it was stressful with an impression of being used by the system and irritating when many of us were caught out and charged by the police for [breaking curfew]. As we cannot do anything that's against the system, we had to call for help at the Dignity Centre,” Ndiane says.

Founded in April 2016 by John Sloan and Paul Hutchings, humanitarian organisation Refugee Support operates the Dignity Centre in Nicosia, Cyprus, where around 32,000 refugees reside – the highest figure per capita in Europe.

It all started when Hutchings visited a refugee camp in Calais in September 2015, and realised that although governments and huge humanitarian organisations had abundant resources, their pace of sourcing and distributing was way too slow.

“Aiming to provide aid more quickly and flexibly we tried to occupy the space between independent volunteers who could help refugees immediately in a very tailored way and the large organisation with scale,” he says.

Since its launch, the Dignity Centre has offered food, sewing classes, language/IT courses for migrants and around 1,500 refugees have been registered to use and receive their services so far. When Covid-19 hit, it had to shut down for the lockdown in March, but staff were determined to continue to help people who were forced to be isolated under the lockdown.

Paula Tamarit and Laura Matteini, two managers responsible for the Dignity Centre, came up with the idea of buying food in bulk and doing a door-to-door food drop-off service. “The best thing we could do was helping people to fulfil their basic needs. Focusing on asylum seekers without coupons first, we were delivering food bags from the supermarket to the doors of their homes, introducing hygiene items and masks made by our master tailor,” says Tamarit.

Tamarit and Matteini started by making sure they were in close contact with people who were coming to the Centre, even before being aware of what they needed. They created a list based on members, who made requests by sending volunteers WhatsApp or SMS messages.

“During the lockdown we created a WhatsApp broadcast with migrants where we were sharing useful information and rules changed by the government's decision. We worked on it adding new contacts during the lockdown, so when we started our foodbank delivery service, the list to inform the people was done already. We spread the news with everyone and all had the same chance to apply for it,” Matteini says.

Then they quickly re-organised the system and started a foodbank service for those who had no income. Only two days of decision-making was needed to set up the whole foodbank system.

“What we did was to quickly see what people needed so that we could provide personal service, and the day after? We did that straight away,” says Hutchings. Food with essential suppliers are packed and ready to be delivered for quarantined migrants. Photo: Refugee Support

Since the end of May, they have been running a food pick-up service for a maximum of 200 people a week. There have been requests from over 1,000 people who want to benefit from the foodbank but there are financial limits on how many people they can deliver food to.

“Thanks to the Dignity Centre that has developed and put a system in place, I could send a message with my location whenever I needed something and they brought to us all the basic needs. It considerably eased tension, conflict, and frustration between migrants during the process of being quarantined,” Ndiane says.

When the lockdown ended and the Centre was re-opened on May 21st, they turned the foodbank into a takeaway system. “People directly come to the Centre to collect the food bags in a welcoming environment with music playing. The only thing they have to do is show us their membership cards and our confirmation messages containing the day and time of their appointments, so that we can check the names on our list,” Matteini says.

MORE IN THIS SERIES:

Staff have also increasingly focused on their existing work that helps restore the economic independence of refugees, in light of the financial consequences of the pandemic.

This includes a sewing workshop to train migrants to learn techniques so that they can earn income from it, teaching members to design, sew, control quality, and sell the products. An online shop, Refumade, was opened in June 2019, and around 30 members (25 women and four men) are currently taking part in manufacturing handmade items.

“When I came to the Centre as an asylum seeker, John Sloan was looking for someone who could teach a group of women how to sew. I said that I would be happy to help and since then, the Centre is a place that I feel as my home where I feel supported and protected. I have found another family and the chance to work as a professional tailor,” says Thierno Ba from Conakry, Guinea, who has lived in Cyprus since 2018 and is now working as a master tailor at Refumade. The organisation's structured system made a real change in tackling the Covid crisis but challenges remain. Many projects and fundraising events are directly affected and halted by the pandemic, and about 12,750 euros of monthly costs are required for running the Centre to sustain vital services.

“We had large fundraising events that haven't happened this year due to Covid-19. We have raised about a hundred thousand pounds less in 2020, that is a big hole that needs to be filled,” says Hutchings.

The Refumade website has been running regardless of restrictions, but it, too, faced challenges.

“During the lockdown when the Centre was closed, I worked from home making masks for the asylum-seeker community. Laura and Paula provided me with fabrics and elastics every week, so I was able to continue sewing and to sell the stock in the UK, but we almost ran out of resources and we were not able to make new things. So migrants could not earn any income from it,” Ba says.

Tamarit points at a malfunctioning national system. “What we think should be improved is the assistance provided by the state, that is often stuck in inefficiencies of the system and puts many obstacles for asylum seekers to become self-efficient and also to obtain a basic sustenance. And this affects especially newcomers during the spreading of the pandemic who cannot even apply for asylum and enter the system,” she says.

A lack of funding and a working administrative system are commonly mentioned as factors threatening migrants during the pandemic. According to the International Rescue Committee (IRC), the failure of the international community to combat Covid-19 has led to devastating consequences for the vulnerable especially within conflict settings. This includes insufficient amounts of fundraising and the absence of a globally coordinated approach between nations in terms of information-sharing, humanitarian aid, or supply chain management.

“We strongly believe that giving people the instruments to be independent and build a relational network is the best and most dignifying way to provide help, but we also know that mental effort requires a full stomach. So in case of a new lockdown or further difficulties deriving from the pandemic, we hope to find the necessary things to continue filling the gaps and provide basic help,” Tamarit says. A volunteer at the Centre is looking at the CV of one of its members. Photo: Refugee Support

The prospect of the crisis lasting well into next year forces everyone to cope with unexpected risks quickly and flexibly.

“Migrants face a whole set of challenges under the Covid crisis, from poverty to isolation and poor mental and physical health to chronic anxiety and insecurity. Some are shared while some are different depending on social situation, status, access to resources and health issues,” says Marie Gillespie. She is a sociology professor at the Open University, who led the research project “Cov19: Chronicles from the Margins” in March, for which she investigated how migrant groups with diverse backgrounds responded to the Covid crisis.

She found that cooperation with local communities was indispensable in order to generate socio-economic benefits for both refugees and the local people in the long term, which might bring about genuine integration through positive impacts of supporting the independence of refugees during the Covid crisis.

The Dignity Centre is trying to foster local society's economy by shopping locally cultivated vegetables and fruits, which will be beneficial for economically devastated farms and local shops affected by the lockdown.

“We have a philosophy of buying locally because what we also try to help is the local economy as well as refugees. After a while it became clear this also had social benefits. Anywhere refugees are first arriving, there are always tensions whether visible,” says Hutchings, noting that giving back to the local community helps them combat racist attitudes.

The Centre is now changing its own system again, partly because of Covid-19 but also because of its philosophy. “As fewer and fewer volunteers can cross the border due to restrictions, we are trying to run the Centre by using migrants as staff,” says Hutchings.

In order to cope with Covid-19 and anti-immigration movements, and also to empower its members, they are handing over as much power as possible for controlling the Centre from the givers to the receivers of help.

“I got a job in the restaurant in Limassol but my favourite work in the past was a volunteer at The Dignity Centre where I could meet many different people like myself, who have gone through traumatising crises and are eager for a fresh start in life,” says Ndiane.

Hyunah Kim is a freelance journalist based in Sweden specialising in migration, integration, gender equality, and human rights. Check out her work here.