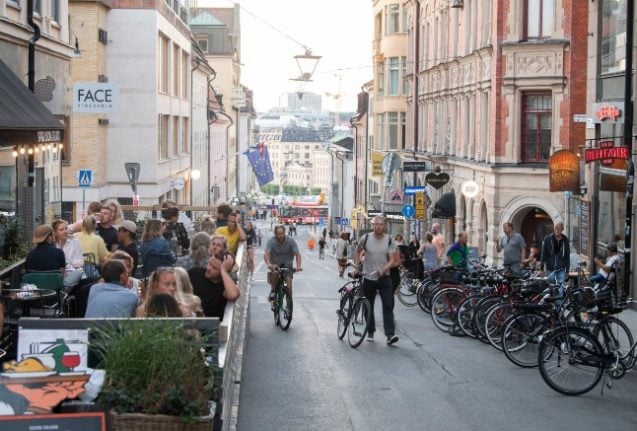 Sociable people like these Stockholmers mulling around Götgatan may be the first to get infected. Photo:Fredrik Sandberg/TT
“There are indications that the Swedes have gained an element of immunity to the disease, which, together with everything else they are doing to prevent the infection from spreading, is enough to keep the disease down,” Kim Sneppen, professor of biocomplexity at the Niels Bohr Institute in Copenhagen, told the Politiken newspaper.
According to figures collated by OurWorldinData, Sweden on Friday had registered a daily average of 23 cases per million people over the the preceding seven days, compared to 61 cases in Denmark and 20 in Norway.
Sneppen acknowledged, however, that the country had suffered a much higher death rate in April, May and June than that seen in Denmark.
“That is what they have paid. On the positive side, they may now be finished with the epidemic.”
Sneppen, together with Lone Simonsen at Roskilde University, developed a model to explain the trajectory of the pandemic in Sweden and Denmark which emphasised the importance of 'superspreaders', a minority in the population who disproportionately spread the virus.
A study published by Tom Britton at Stockholm University in August estimated that if you assume that the most sociable and active members of society are the first to get infected, then threshold for full herd immunity might be as low as 43 percent of the population, far below the 60 percent to 70 percent that is the classic threshold in epidemiology.
“Just 20 percent immunity makes a pretty big difference, because those who were infected at the start of the epidemic were the most susceptible to the coronavirus and the most socially active,” Britton told Politiken.
At a press conference on Tuesday, Denmark's state epidemiologist Kåre Mølbak warned that Denmark was still in the “first wave of infection” because the wave in the spring did not have time to “develop completely because we went into hibernation”.
Søren Riis Paludan, professor of biomedicine at Aarhus University, said that more and more evidence suggested that the Public Health Agency of Sweden may have been right in choosing to pursue a strategy that allowed for a controlled development of immunity.
“It can be argued that they chose the right solution, but they were poorly prepared for the strategy at the beginning and could not protect their vulnerable,” he said.
But others said there was still a risk of further outbreaks in Sweden.
“I do not think that it can already be ruled out that Sweden will also have a flare-up like the one in Denmark,” Allan Randrup Thomsen, professor of virology at Aarhus University, told the newspaper.