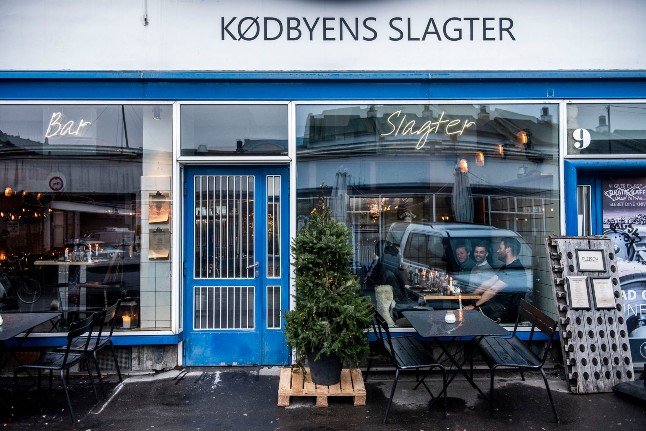 Fleisch, one of the popular restaurants in the Kodbyen meatpacking district. Photo: Celina Dahl/Ritzau Scanpix
From 10pm on Thursday, people will be banned from gathering in  Flæsketorvet, and the Kød-, Slagter- and Høkerboderne streets until 2am in the morning.
“There has been a tendency for many people to congregate in the outdoor areas in Kødbyen, and as the alcohol level has increased, responsibility has decreased,” Police director Anne Tønnes, said in a statement.
“That's why we have deemed it necessary to have a gathering ban so that the party doesn't move outside when restaurants close at 10pm.”
The ban will come into force in parallel with new restrictions announced on Tuesday, which will require restaurants and bars to close at 10pm, starting tonight.
The police are also establising 'warning zones' at the nearby streets Vestergade and part of Gothersgade, and also at Kongens Have, parts of Fælledparken, Islands Brygge, Dronning Louises Bro and the area by Sandkaj and Göteborg Plads, which are also popular nightlife areas.
Warning zones are areas that the police will patrol frequently to make sure that restrictions are being followed and that there is not too much crowding.
Here is the area which will be off-limits from tonight: