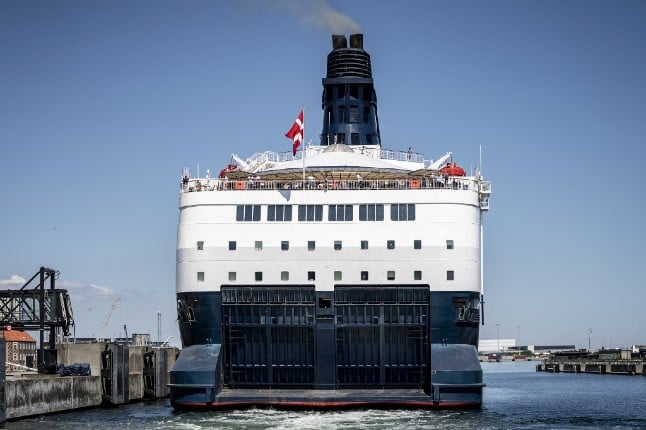 A DFDS ferry from Copenhagen to Oslo. Photo: Mads Claus Rasmussen / Ritzau Scanpix / AFP
This means that the entire of Denmark is likely to be classed as 'red' on Saturday, unless Norway's government decides to override the agency's advice for the first time.
In its latest advice, published on Tuesday evening, the Norwegian Institute of Public Health recommended that the two last regions in Denmark, Zealand and North Jutland, be classed as 'red'. The two regions have reported 41.1 and 41.2 cases per 100,000 respectively over the past two weeks, putting them far over Norway's threshold of 20.
Denmark's capital region, Midtjylland region, and Southern Denmark region were all classed as 'red' in the agency's last update on September 9th.
At the same time the agency said that it was advising that the quarantine requirement be removed from two regions in Sweden, Kalmar and Blekinge, which reported 6.9 and 4.4 cases per 100,000, something the agency described as “a significant decrease in infection”.
The agency also recommended removing the quarantine requirement for travellers from Poland, where the incidence was 19.2 per 100,000.
“Nevertheless,” it warned. “It is important to pay special attention to both the situation in Poland and the number of imported cases from Poland to Norway in the days ahead, partly due to a lot of travel activity between Poland and Norway.”
For Finland, the agency recommends removing the entry quarantine for the region of Kainuu (12.5), but introducing the entry quarantine for the region of Southern Savonia (Etelä-Savo) (30.4).
The agency also recommends removing the quarantine requirement for travellers from Iceland, where the incidence is 15.8, and Liechtenstein, where the incidence is 7.8.