Paris today is a leading international city in commerce, as well as culture. It attracts entrepreneurs focusing on the future, as well as tourists seeking tradition.

A thriving student population makes the city even more dynamic – with over 700,000 students (including 120,000 foreign students) in the wider Paris Region. Paris also takes quality of life very seriously (where else could you sip sparkling water from drinking fountains?)

The Local, in partnership with Paris-based business school ESSEC, presents an infographic that captures the essence of Paris in the 21st Century – a city to boost your joie de vivre and your career prospects. 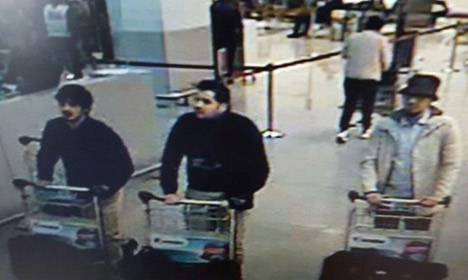 The exhibition will feature Brussels Airport bomber Ibrahim El-Bakraoui and other terrorists. Photo: Public domain
In an exhibit partly inspired by Tehran's Martyrs' Museum, a Danish group of artists plans to include brothers Ibrahim and Khalid El-Bakraoui, who detonated bombs in the deadly Brussels attacks on March 22nd, and Foued Mohamed-Aggad, who blew himself up at Paris music venue Bataclan on November 14th.
The installation will have the look of a museum, using images of the “martyrs”, replicas of their belongings and plaques to explain who they are.
The suicide bombers will be featured alongside historical figures considered to have died for their cause, such as French heroine Joan of Arc and Greek philosopher Socrates, said Ida Grarup Nielsen of artist collective The Other Eye of The Tiger.
“A guide will talk about Foued Mohamed-Aggad and the events at the Bataclan, during which the room will also be [filled] with sound and light,” she told AFP.
The story would be told “more from his point of view,” she said.
The El-Bakraoui brothers would not be included in the guided tour but photos of them and replicas of their belongings would be put on display, including a black leather glove believed to have been worn by Ibrahim El-Bakraoui to conceal a bomb detonator.
The exhibit is scheduled to go on display from May 26th until June 10th in a former abattoir in Kødbyen, Copenhagen's trendy Meatpacking District.
The venue is home to a theatre group whose artistic leader, Christian Lollike, courted controversy in 2012 by staging a play based on the manifesto of Norwegian mass killer Anders Behring Breivik.
“Our exhibit is really about describing the term 'martyr' from as many different angles as possible and through history,” Nielsen said.
Everyone is “the hero of [their] own story,” she added.
Danish gunman Omar El-Hussein, who killed two people in twin attacks in Copenhagen in February last year, would not be part of the exhibit since it was unclear whether he had been willing to die for his beliefs, she said.
The 22-year-old was killed in a shootout with police hours after killing a security guard outside the city's main synagogue.
A local member of the ruling Venstre party, Diego Gugliotta, on Monday reported the event and its organisers to police for “encouraging terror”.
Portraying international terrorists as heroes could push some people to “take the last step and join a terror organisation,” he wrote on Facebook.
Url copied to clipboard!