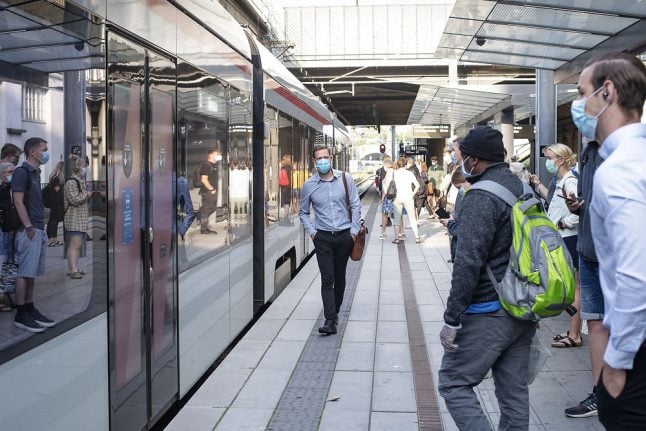 That continues a trend of increasing Covid-19 incidence in Denmark and in particular Aarhus as well as the town of Ringsted, the location of an outbreak at an abattoir.

Sunday’s figures followed on from the 169 cases registered between Friday and Saturday, of which 79 were in Aarhus.

Newly-released figures on Monday showed a total of 76 new cases of coronavirus nationwide. Although the figure is lower than the previous days, Aarhus, with 40 cases, still represents over half of the total for the country.

Data from national infectious disease institute SSI and published last week by DR shows that, between June 1st and July 28th, 61 infections were registered in the municipality, an average of a little over 1 infection per day.

READ ALSO: Why coronavirus spike in Aarhus was not caused by a single event

Authorities in the city have announced a number of measures aimed at bringing the increasing numbers of coronavirus cases in the city under control.

That includes the obligatory use of face masks on public transport in Aarhus Municipality at all times.

The requirement will remain in place for three weeks from August 11th until September 1st, the Ministry for Health and the Elderly confirmed on Monday, a longer period than the 14 days initially announced.

Passengers on public transport will need both a face mask and a ticket in order to travel.

The order applies to city and regional buses, the Letbane light rail, tourist buses and ferries.

Passengers taking long-distance rail or bus services (for example to Copenhagen) will only be required to wear face masks for the part of the journey which is in Aarhus — specifically the rail or bus terminal in Aarhus.

Passengers must also wear the masks while waiting at bus and light rail stations and at ferry terminals.

Exceptions to the rule apply to “people with breathing difficulties, reduced levels of awareness, or with physical or mental impairments that prevent them from removing their own face masks,” as well as for children under 12, according to the order.

Transport operator Midttrafik on Monday morning placed people around the city to hand out free face masks to passengers who do not have one with them. Free bandages will initially be offered throughout this week, Ritzau reports. The distributors will primarily be present during rush hour.

People in Aarhus have been encouraged to avoid using public transport if an alternative is available.

After reports over the weekend that pharmacies in the city had sold out of face masks, stores in the city have now received five million of the protective item from a national stock, so they are expected to be available in pharmacies as well as drug store chain Matas on Monday.

Capacity for Covid-19 testing has also been expanded in Aarhus. Mobile test centres have been sent to the city from elsewhere in the Central Jutland (Midtjylland) healthcare administrative region.

That means testing should be available at shorter notice following bottlenecking at the weekend. Tests at stationary test centres must be booked using the coronaprover.dk portal, but appointments are not required at the mobile test centres.

It should be noted that mobile test centres are only offered to people without symptoms of Covid-19. You must bring your yellow health insurance card (sygesikringsbevis).

A list of locations for the mobile test centres can be viewed on the Aarhus Municipality website, which currently lists locations as follows:

In other measures, physical attendance of classes at upper secondary schools (gymnasier) and other youth education institutions has been postponed for 14 days.

Visiting restrictions have been introduced at nursing homes and hospitals. One nursing home, Thorsgården in the Åbyhøj area of the city, confirmed on Sunday the first case of the virus at an Aarhus nursing home since March 10th.

Three areas in the city — Bellevue and Den Permanente beaches along with the 'Spanish steps' alongside the city centre canal, have been designated 'hotspots' by police. That means police will be present and can ask people to move on if crowds begin to form.

READ ALSO: MAP: Warm Danish weather is here: these are the overcrowded areas to avoid