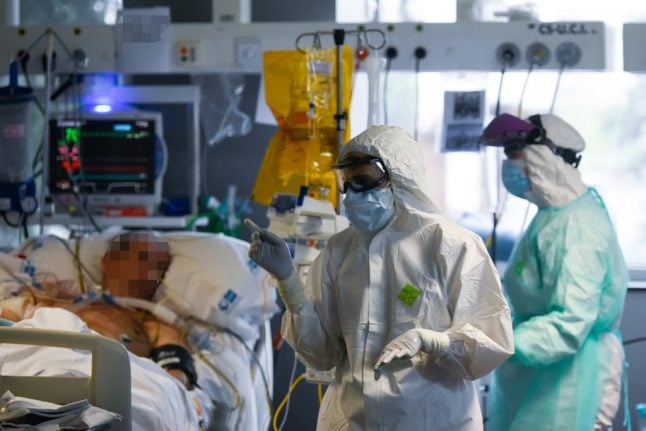 A coronavirus patient is treated at a hospital in Madrid. Photo: AFP

It also found that Spain had the highest peak level of excess deaths – meaning that at a particular stage in the crisis the situation in Spain was worse than anywhere else in Europe.

The study was carried out by the Office for National Statistics in the UK because of the “considerable interest in international comparisons of mortality during the coronavirus (Covid-19) pandemic.”

The ONS said: “The best way of comparing the mortality impact internationally is by looking at all-cause mortality rates by local area, region and country compared with the five-year average.

“All-cause mortality avoids the problem of different countries recording Covid-19 deaths in different ways, and also takes into account the indirect impact of the pandemic, such as deaths from other causes that might be related to delayed access to healthcare.”

The study also concluded that when local authority areas were compared rather than countries, the highest rates of excess deaths were in central Spain and northern Italy.

The highest peak was in the city of Bergamo in northern Italy, where excess deaths reached 847.7 percent in the week ending March 20th. Edward Morgan, Health Analysis and Life Events at the Office for National Statistics said: “Due to the coronavirus pandemic, the first half of 2020 saw extraordinary increases in mortality rates across countries in Western Europe above the 2015 to 2019 average.

“The highest peak excess mortality at national level was in Spain, with some local areas in Northern Italy and Central Spain having excess mortality levels as high as 847.7 percent of the average.

“While none of the four UK nations had a peak mortality level as high as Spain or the worst-hit local areas of Spain and Italy, excess mortality was geographically widespread throughout the UK during the pandemic, whereas it was more geographically localised in most countries of Western Europe.”

When it came to comparing cities, Madrid had the highest peak level of excess deaths.

In Madrid they reached 432.7 percent in the week ending March 27th. The chart below shows overall excess death rates in cities until the end of May. Madrid had the overall largest number of excess deaths. The dotted line represents the 5-year average with the light being over 65s and the dark blue under 65s. When it comes to regions, this list shows the regions around Europe that had the highest mortality rates at the peaks of their epidemics. This Interactive map below shows relative age-standardised mortality rates by week in regions of Europe.

You can view more charts and data in the ONS report HERE.