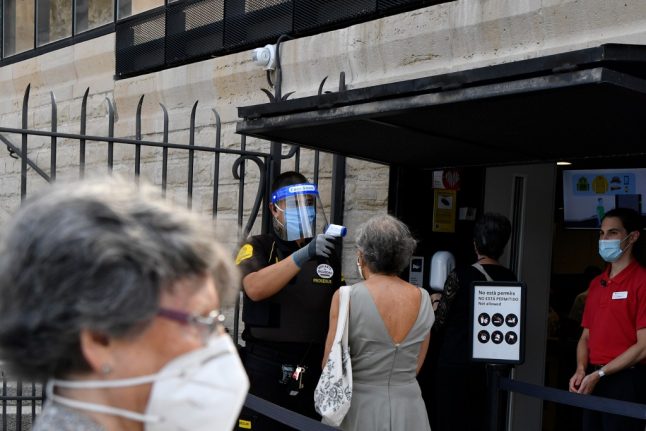 People wearing face masks queue while a security guard uses a thermometer to check people's temperatures outside a mass for victims of the coronavirus at the Sagrada Familia in Barcelona. Photo: AFP

Fresh outbreaks of the coronavirus have led many European countries to tighten measures as they battle to prevent its spread again.

The number of daily notified cases has climbed to 1,738 or 92 percent more than the previous week.

From July 17th, almost four million residents in Spain's second city Barcelona have been urged to stay home by the Catalan regional government.

The government also ordered the closure of cinemas, theatres and nightclubs and banned gatherings of more than 10 people. Restaurants must limit capacity to one-half the usual number.

Since July 15th, people have also been told to stay home in and around the Catalan city of Lerida, a measure affecting around 250,000 people.

Many regions around Spain have imposed restrictions on bars, restaurants and nightclubs.

Faced with a resurgence of infections, many Spanish regions, although not Madrid, have tightened the requirement to wear masks.

In those regions, masks must now be worn at all times in the street and in enclosed public spaces. Lisbon has reported 218 daily cases, a decline of 28 percent from the previous week.

Lockdown at home has been the rule since July 1st for 700,000 inhabitants in the capital region.

That measure has been extended at least until the end of July.

London has reported 662 daily cases, a weekly decline of 12 percent.

Britain is the only western European country where the number of daily deaths remains high however, at around 65 per day.

On June 30th, the central city of Leicester began a localised two-week lockdown with non-essential shops shutting. The restriction had now been partially eased.

Facemasks — already compulsory in Scotland — are now also mandatory in all English shops and supermarkets as of July 24th.

On July 26th, Britain introduced a quarantine for visitors from Spain.

Dublin has reported 17 daily cases, a decline of nine percent.

Having initially planned to open bars fully from July 13th, the date was pushed back to August 10th owing to a resurgence of cases. Gatherings are limited to 50 people indoors and 200 outdoors, and wearing masks in shops will be compulsory.

Paris has reported 823 daily cases, an increase of 55 percent.

A negative virus test will become mandatory at the latest on August 1st for visitors from 16 countries, including the United States, Brazil and Algeria. Otherwise travellers are to be tested on arrival and go into quarantine if  positive.

The authorities have advised against travel to Catalonia. The wearing of face masks has also become obligatory by law in all indoor public spaces including shops and public buildings. Those who don't adhere to the rule face fines of €135.

Regional authorities ordered night-time curfews for beaches and bars in the Brittany resort of Quiberon on the Atlantic coast, after a fast-spreading Covid-19 cluster emerged there last week and in some towns local authorities have also made masks compulsory on the street.

READ ALSO: Is France heading towards a second wave of coronavirus?

Brussels has reported 318 daily cases, a surge of 149 percent.

“We are very worried,” said Belgian PM Sophie Wilmes who urged Belgians to once again work from home if they could.

She said the aim was to avoid a new national lockdown, but also didn't rule it out if the situation continues to worsen.

From July 29th, and for four weeks, the number of people who can gather together has been reduced to five from 15.

Wearing a mask was made compulsory from July 11th for everyone over the age of 12 in enclosed public spaces including shops, cinemas, libraries and places of worship.

Authorities have reported 528 daily cases, an increase of 33 percent.

Despite being less affected by the pandemic than many neighbours, Germany's federal and regional governments have agreed on tougher, targeted lockdown measures to contain local outbreaks and ward off the threat of a second coronavirus wave, including a ban on travel “in and out of the affected areas”.

“We must prevent returning travellers from infecting others unnoticed and thus triggering new chains of infection,” Spahn wrote on Twitter.

The rule is set to come into effect next week. The tests are to be free of charge for travellers.

Germany's public health institute RKI currently considers around 130 nations worldwide to be “risk countries”, with EU and Schengen area neighbours among the exceptions.

On Friday, Germany announced it would offer free coronavirus tests to all returning travellers and had been considering if it would make them mandatory for people coming back from areas deemed high risk.

The new measures will see test facilities installed at airports across the country.

Vienna has reported 127 daily cases, a rise of 18 percent

Rome has reported 241 daily cases, an increase of 23 percent.

In Campania in the southern Naples region, a 1,000-euro ($1,180) fine was imposed on July 25th in establishments that allow clients to go without masks.

Coach passengers who arrive in Rome from abroad will also be tested.

Authorities in Norway now advise against travel to Spain and Andorra, however. That is due in part to increased infection spread in some parts of northern Spain, particularly in the northern regions Aragón and Catalonia.

Travellers from Spain to Norway must now quarantine for ten days upon return. The quarantine rule is not applied retroactively and will come into effect from the time of implementation on Friday.

Sweden, which was far worse affected by the coronavirus outbreak than its Nordic neighbours this spring, has unlike much of Europe been seeing a sharp downturn in the number of new daily cases since early July. The number of coronavirus deaths is now at around seven deaths a day on a 14-day average scale.

Public events of more than 50 people remain banned, as are visits to elderly care homes. Schools for over-16s and universities are generally set to reopen to students when the autumn semester starts.

Health chiefs have said that they are unlikely to introduce new measures such as travel restrictions or face masks while the curve is pointing downward, but preparations are being made for a potential second wave.

The Public Health Agency has published three different scenarios for how the pandemic may play out this autumn – one where the infection rate remains at a low level, one medium-case scenario where the virus spreads in uneven clusters, and one worst-case where new cases increase steadily.