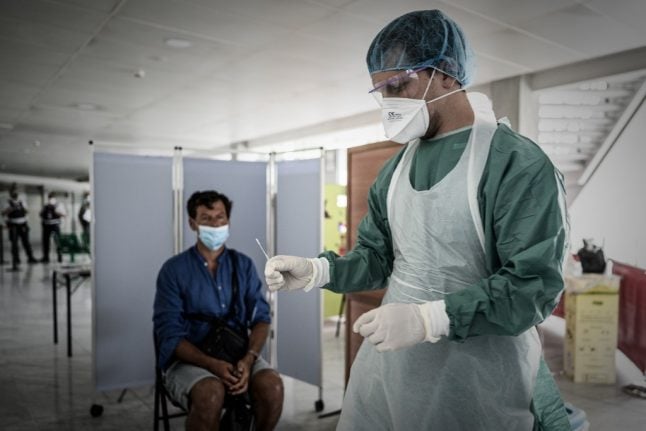 Testing at airports is increasing in European countries. AFP

Europe accounts for a fifth of the world's more than 15 million cases and remains the hardest hit in terms of deaths, with 207,118 out of more 630,000 globally since the pandemic emerged in China late last year.

The WHO's European chapter pointed to rising cases on the continent over the past two weeks, stressing that tighter measures may be needed to curb infections.

Europe like other regions is struggling to balance restrictions to halt the spread of COVID-19 against the need to revive economies as they emerge from some of the world's toughest lockdowns.

A three-year-old girl died in Belgium, becoming the country's youngest known coronavirus victim, in a further wake-up call for a continent which has only recently lifted shutdowns.

“The recent resurgence in COVID-19 cases in some countries following the easing of physical distancing measures is certainly cause for concern,” a WHO-Europe spokeswoman told AFP.

“If the situation demands, reintroduction of stricter, targeted measures with the full engagement of communities may be needed.”

In Spain, health authorities are already facing worrying outbreaks in Aragon and Catalonia, where officials have reintroduced local restrictions and urged residents in Barcelona and its suburbs to leave home only for essential trips for two weeks.

“We have to monitor what's going on, see where we need to take action and act early,” said health ministry official Maria Jose Sierra.

“If the important outbreaks are controlled quickly and if we manage to ensure that there are no (other) outbreaks of such magnitude, we will have a much more contained situation.” In this file photo taken on June 30, 2020 at the airport in Frankfurt am Main shows a view of the laboratory of German biotech company Centogene which opened a walk-in testing centre. AFP

France has yet to resume general travel to and from these countries so the tests will be for French citizens and residents.

Masks are now mandatory on public transport and in shops and enclosed spaces in France but there are fears that the summer holidays could see a spike in cases with people flocking to beaches and tourist spots.

Britain on Friday made it compulsory to wear a face covering in shopping centres, banks, takeaway outlets, sandwich shops and supermarkets, following the lead of Scotland.

Exceptions have been made, for example, for children under 11 or people with respiratory problems, but anyone refusing to cover their nose and mouth risks a fine of up to Ł100.

“It was a mistake to lift mandatory mask use so soon,” said one shopper, Andreas Poschenreither.

The United States, the hardest-hit country by the virus, recorded more than 144,305 total fatalities. It has seen a coronavirus surge, particularly in southern and western states.

US President Donald Trump has scrapped next month's Republican convention in Florida at which he was due to be confirmed as the Republican candidate for November's election, saying “the timing for this event is not right.”

Bolivia meanwhile postponed its general elections for a second time because of the pandemic, putting it off until October 18, while South Africa said it was closing public schools for a month from July 27.

There was bad news in China and India — the two world's most populous nations — as new clusters emerged.

Chinese authorities said Friday they would introduce a wave of testing in the port city of Dalian, home to about six million people.

Kindergartens and nurseries have been closed, and some communities have been placed under lockdown, according to state-run newspaper Global Times.

Prime Minister Narendra Modi's government imposed one of the world's strictest lockdowns in late March, but it has been steadily eased to lessen the devastating economic impact.

State governments have now brought in fresh restrictions as cases soar, including in IT hub Bangalore.

UN projections have warned the virus could kill 1.67 million people in 30 low-income countries.

Virus restrictions have been bolstered in several countries this week, including Australia and Belgium as well as in Hong Kong and the Japanese capital Tokyo.