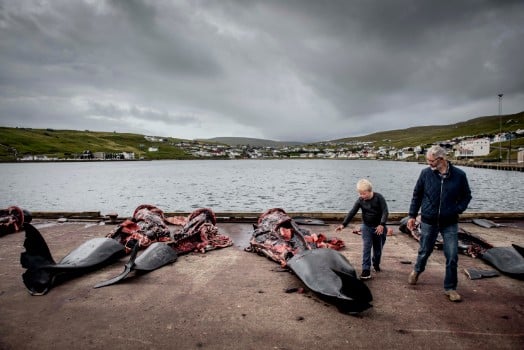 A man and child walk among pilot whales on the quay on the Faroe Islands in 2019. Photo: AFP

The ancient grindadrap (slaughter), which began more than 1,000 years ago, is a cultural mainstay of the archipelago, an autonomous Danish territory in the North Atlantic islands — where whale meat is a dietary staple.

But activists have long condemned the practice and environmental NGO Sea Shepherd did so again after some 250 long-finned pilot whales and some Atlantic white-sided dolphins were killed Wednesday off Hvalba, a village on the southernmost island of Suduroy.

Local media quoted Sea Shepherd as once again demanding an end to what it terms a “barbarous practice.”

The issue of fisherman proximity had been an issue of concern for local authorities owing to the coronavirus — the Faroes, population barely 50,000 has logged 188 cases to date but just one since April.

Fisheries Minister Jacob Vestergaard gave the go ahead on July 7 for the hunt with the proviso that everyone avoid large gatherings.

The hunt sees vessels herd the whales and dolphins in a bay whereupon fishermen wade in up to their midriffs and slaughter them with knives, leaving the sea to turn red with blood to the horror of animal rights campaigners.

Sea Shepherd managed to disrupt the 2014 season but the group has slammed legislation which authorises Danish military vessels to ensure the NGO is kept outside Faroese waters.

Faroese are divided on the practice but many urge foreign media and NGOs to respect their traditional island culture where fishing retains a central place.