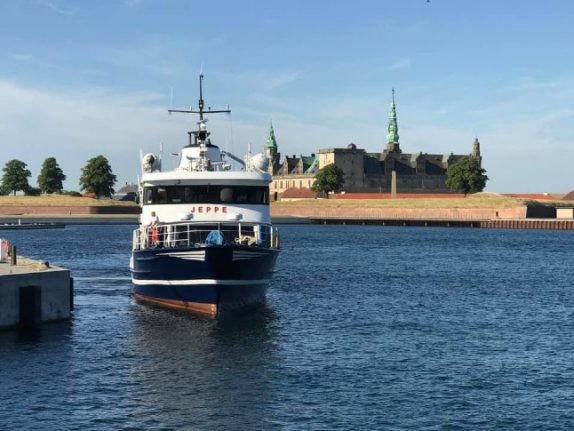 One of the Sundbusserne ferries which crosses between Helsingborg in Sweden and Helsingør in Denmark. Photos: Sundbusserne
On Thursday afternoon, Denmark's foreign ministry announced that the two counties had now met the criteria to be classed as “open”, under criteria used by the country's SSI infections agency.
An average of 13.8 and 12.5 people per 100,000 of population have tested positive for coronavirus per week over the past fortnight respectively, bringing the two beneath the threshold of 20 cases per 100,000.
“It feels fantastic, because we're now back to where we were on March 13th when Denmark shut the border to Swedes,” Carl Johan Sonesson, head of Skåne's regional council, told Sweden's public broadcaster SVT
“It means that we have successfully brought down the Covid-19 infection in Skåne. We've now got pretty low numbers and that means the Danes are daring to take us.”
The countries of Kronoberg and Västerbotten, which fulfilled the criteria at the time of the SSI's last assessment a fortnight ago, still have low enough infection rates for residents to be allowed entry to Denmark.
People with a “worthy purpose”, such as cross-border commuters, people on business trips, and people with family or partners across the border, were already able to cross into Denmark from Skåne even before the announcement, so the change will mostly affect those crossing over for leisure purposes.
People coming from the four Swedish counties now allowed free entry will still have to show papers proving their residency. An official letter with an address is sufficient, but the Sydsvenskan newspaper instructed readers on how to print out the address details from the Swedish Tax Agency's population register to ensure entry.
The decision also brought jubilation from the Danish side of the border, with Helsingør's mayor Benedikte Kiær tweeting “HURRA!” ahead of the announcement, as she posted the previous week's reported cases from Skåne.

“This is the day I've been waiting for a long time,” she told the local Helsingør Dagblad after the news became official.
In the foreign ministry's announcement, it said that Danish residents travelling to Skåne and Blekinge would no longer be recommended to stay home for 14 days.
Norway will also next Wednesday open up to leisure travel to and from Skåne, Blekinge, and Kronoberg, but unlike Denmark, it will not open up to the Swedish county of Västerbotten.