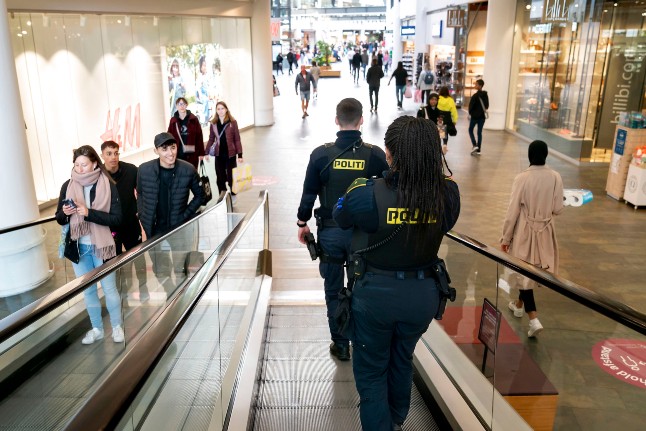 People in an elevator at a shopping centre in Frederiksberg, Copenhagen. Photo: Linda Kastrup/Ritzau Scanpix
The country's economy will shrink by 5.25 percent this year, before rebounding by 4.3 percent in 2021, according to the Commission's latest interim European Economic Forecast.
This is better than any other country except Poland, which will only see its economy shrink 4.3 percent.
Sweden, which unlike Denmark allowed shopping centres, bars and restaurants to stay open throughout the pandemic, is expected to see its economy shrink 5.3 percent.
“Although Denmark was one of the first European countries to impose extensive lockdown measures in response to the COVID-19 pandemic, economic activity in the first quarter of 2020 proved more resilient than previously expected,” the forecast's authors wrote.
“The fall in private consumption was fairly moderate and construction investment held up relatively well. Exports also surprised positively, mirroring the high share of pharmaceuticals and agricultural products in Denmark’s export mix.”
It said that in the first three months of 2020, which included the first two weeks and a half weeks of Denmark's lockdown, the country's economy had shrunk by just two percent on the same period last year, less than the 3.2 percent decline seen in the EU overall.
The commission said that a faster than expected decline in Covid-19 infections had then allowed Denmark to come out of lockdown earlier than planned, further reducing the economic impact.
The Commission also credited Denmark's government for its “swift, effective and recently stepped-up policy responses”, such as the new recovery package, which it said had improved its outlook for the country since its earlier spring forecast.
Sweden's “rather less restrictive measures” had, the Commission said “helped cushion the immediate impact on the economy, particularly on domestically oriented branches”, but it said that the country's economy had suffered nonetheless, because of the pandemic's impact on its export-driven economy.
“Durable consumer goods, travel services and capital goods producing sectors were particularly affected,” it said.