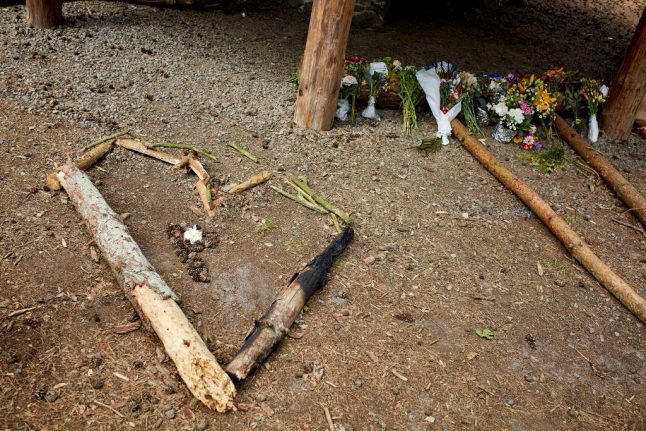 A heart made from driftwood lain at the spot where the man's body was found. Photo: Pelle Rink/Ritzau Scanpix
The body of the 28-year-old man, who according to media reports was the son of a Danish father and a Tanzanian mother, was found on the Danish island of Bornholm, located in the Baltic sea east of Copenhagen, on June 23.
Hours later, police arrested two men in their twenties, one of whom had known far-right sympathies, but prosecutors maintain that race was not a factor.
“The crime is the result of a personal relation that went very wrong. It is not racially motivated,” prosecutor Bente Pedersen Lund, told AFP.
The victim's remains were found next to a kiosk in a forest on the picturesque island, home to some 40,000 inhabitants.
The two suspects are brothers and knew the victim and have pled guilty to aggravated assault but not murder, according to one of their lawyers. Following their arrest, they were remanded in custody after a closed hearing.
According to the indictment, one or both of the assailants had also knelt down on the victim's neck, prompting comparisons among the public with the death of George Floyd in the USA in May which sparked Black Lives Matter (BLM) demonstrations around the world.
“The older brother… has a swastika tattoo on his leg and sympathies for the white supremacist movement and the victim is black so I understand why people are questioning whether or not this is a racial crime,” Asser Gregersen, the younger brother's lawyer, told AFP.
But Gregersen agrees that it is not a question of a hate crime and says his client does not harbour any racist sympathies.
“I understand the speculation, but the public must have confidence in what lawyers and authorities say and not just think that the police are ignoring a racial motive,” he said.
However not everyone is convinced by the assurances of prosecutors.
“It's not our point to investigate the motive but we are questioning why the police was so quick to rule out racism as a motive,” Roger Courage Matthisen, spokesman for the organisation Afro Danish Collective, said.
“Racism doesn't have an on-off switch and clearly the alleged perpetrators have strong Nazi and racist connections,” Matthisen added.
The prosecutor's office did not specify why a racist motive was ruled out, referring to the confidentiality of the ongoing investigation.
“We have not turned a blind eye to this possibility, but it is unlikely,” Pedersen Lund said.
In Denmark, reports of racist crimes are rare but steadily increasing. Between 2016 and 2018 they almost doubled from 140 to 260, according to figures from the Danish Crime Prevention Council.
In early June, over 15,000 people joined a march against racism in Copenhagen, under the banner of the BLM movement, following the May 25 death of Floyd, an African-American killed by a white police officer in Minneapolis
in the US.
Url copied to clipboard!