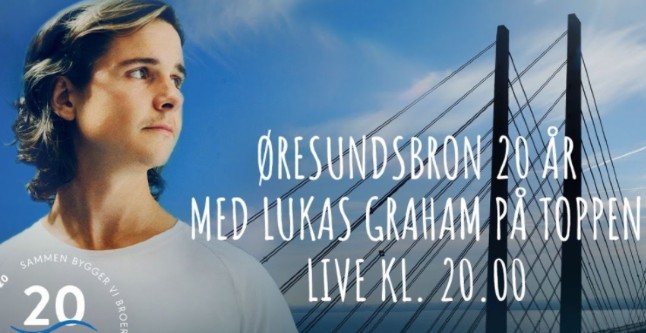 Lukas Graham's concert will be broadcast live. Photo: Oresund Consortium
The concert, at 8pm, will be broadcast live on the Oresund Bridge website and on its Facebook page.
“We're still making something big out of the celebration even in the age of social distancing,” John Alexander Sahlin, Head of Communications at the Öresund Bridge Consortium, told the Sydsvenksan newspaper.
Lukas Graham, which comprises singer Lukas Forchhammer and drummer Mark Falgren, has been one of Denmark's most successful acts over the last decade, known for hits such as “7 Years”, “Mama Said” and “Love Someone”.
“We've been looking for a name that is known in Swedish and Danish contexts, but also internationally,” Sahlin said.
“Lukas Graham will stand on top of one of the pylons and play. – It is a cool place with strong symbolic value – with fantastic views of Sweden, Denmark and the sea. We are hoping for clement weather.”
The concert replaces the dance festival which was to have been held on Malmö's Ribersborgs beach, which has superb views of the bridge.
After the concert there will be a light show, after which special jubilee lights will be lit at 23.15 and kept lit for 8 minutes, something that will be repeated daily until July 5th.
The concert will be broadcast on YouTube below: