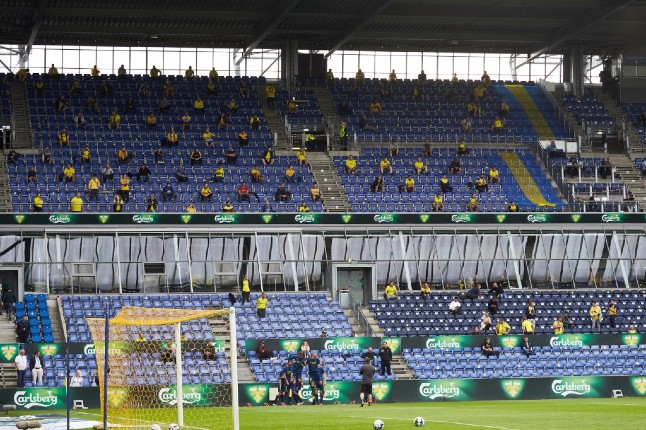 Thibault Savary/AFP
For 41-year-old Chris, it was “the best experience of my life”.
Marriage, fatherhood, highly-paid new job? No. He was referring to the opportunity to finally attend a Danish league football game along with 3,000 others for the Brondby v Copenhagen clash on Sunday.
“After three months without a stadium, this return is the best experience of my life,” Chris told AFP after the 1-1 draw.
In Denmark, crowds have been limited to 500 since the lockdown but Sunday's game was allowed special dispensation to host 3,000 under strict coronavirus health protocols.
Now the authorities will assess the advisability of increasing the number of people present in the stands on a more regular basis.
Inside the stadium on Sunday, supporters were asked to stay two metres apart in a stadium usually full to its 28,000 capacity. Despite that, fans were looking on the bright side.
“It felt like there were 30,000 here today,” said Emil, 22. “I missed the stadium so much, and so did everyone. It's really great to be back.”
The Danish league had resumed on May 28 behind closed doors.
Football in Europe is very slowly returning to normal even if the major leagues of England, Spain, Italy and Germany have also resumed without fans.
However, earlier this month, 16,000 spectators watched a Serbian Cup semi-final.