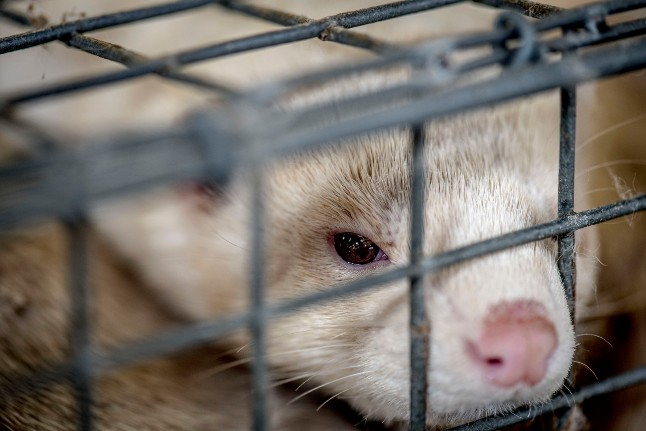 A mink at a farm in Jutland. Photo: Asger Ladefoged/Ritzau Scanpix
Nicholas Kühn Hove, the head of emergency preparedness at the Danish Veterinary and Food Administration said in a press statement that samples from the animals had been sent to be tested at Denmark's infectious diseases agency SSI over the weekend, after some of the animals displayed symptoms.
At the same time, the farm was immediately quarantined.
“When there was a suspicion of infection among the minks over the weekend, we placed immediate restrictions on the mink farm,” he said.  “No animals, and only a few employees, were able to go in and out.”
According to Reuters, 11,000 animals at the farm will now be slaughtered under the precautionary principle.
These are the first recorded cases of coronavirus infection at a Danish mink farm, although two mink farms in The Netherlands had animals test positive in April.
In a press statement, the Danish mink breeders' association, said that they believed that the mink must have been infected by a human who had contracted the virus.
“The infection was probably carried into the farm by the owner or an employee,” they wrote. “Danish Mink breeders are in close dialogue with the authorities, and have been so since the first Dutch case in mid-April.
According to TV2 Nord, a person associated with the farm has also tested positive.
According to the Veterinary and Food Administration, animals do not play a significant role in the spread of coronavirus.
“There is still no indication that pets play a role in the spread of covid-19 to humans,” a spokesperson told TV2.