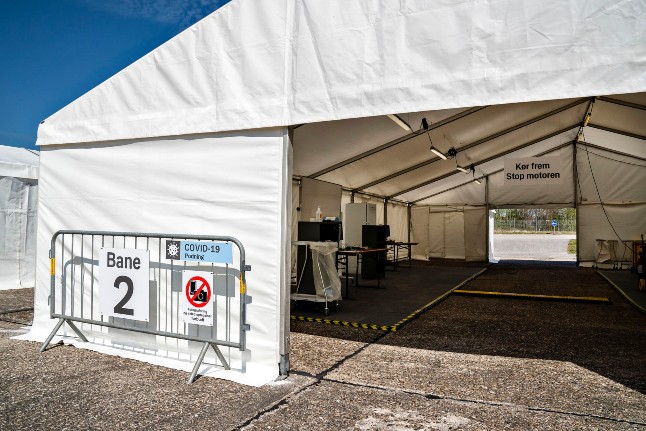 At the Frøslev border, TestCenter Danmark has set up a white tent a little like this one (which is in Aalborg). Photo: Henning Bagger/Ritzau Scanpix
TestCenter Danmark, Denmark's new public-private testing joint venture, has set up one of its white tents at Denmark's main southern border post at Frøslev, and has parked testing ambulances at the other southern border crossings.
It has also opened a testing centre at Kastrup airport,
“It's gratifying that the authorities have taken this initiative and that we can now offer travellers coronavirus tests quickly and easily at the airport,” Thomas Woldbye, the airport's chief executive told Sweden's Expressen newspaper.
This week, the tests will only be available to those who have a Danish CPR number, but from next week, TestCenter Danmark hopes to have put in place the IT systems it needs to test citizens of other countries coming to Denmark.
Peter Ivan Andersen, the doctor running the Frøslev test centre, said that people who already have possible symptoms of  coronavirus should not attend the centres.
“We do not test sick citizens, so they should not book into a test center, because they will be rejected because we do not have the necessary protective equipment,” he said. “It's just a test for those who want to be on the safe side and who have been abroad.”
After having a throat swab test, Danish residents visiting the centres will be able to see the result within a few days by logging in to www.sundhed.dk