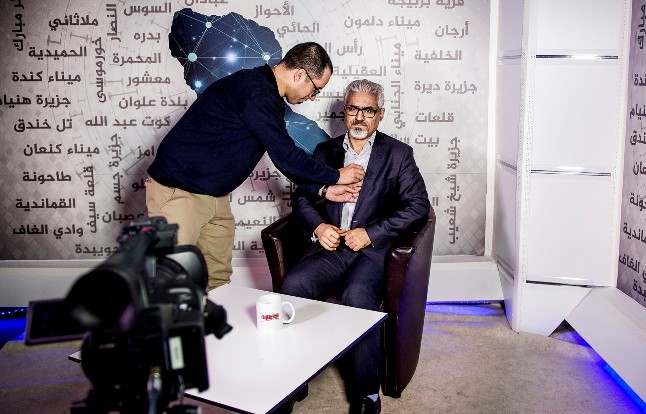 Yaqoub al Tostari and Habib Jabor at ASMLA's television studio in Ringsted. Photo: Liselotte Sabroe/Ritzau Scanpix
They are suspected of having received funds from Saudi Arabia.
Danish police said they were prosecuting “three people for financing and promoting terrorism in Iran, including in collaboration with a Saudi intelligence service”.
“We will not accept such activities under any circumstances and our ambassador in Riyadh has repeated the same message directly to the Saudi authorities,” Foreign Minister Jeppe Kofod said in a statement, in which he deplored “new very serious charges”.
The trio, all living in Denmark and members of ASMLA (Arab Struggle Movement for the Liberation of Ahvaz), have been facing prosecution since February for spying for Saudi intelligence.
According to Danish intelligence service PET, they worked for Riyadh between 2012 and 2018.
They are also alleged to have been the target of a planned attack on Danish soil in the autumn of 2018 which Copenhagen believes was sponsored by the Iranian regime in retaliation for the killing of 24 people in Ahvaz, southwestern Iran, in September 2018.
Tehran has formally denied the attack plan in Denmark.
Shia Iran regularly accuses Saudi Arabia as well as the United States and Israel of supporting the separatist groups. Sunni Saudi Arabia is the Islamic Republic's main rival in the Middle East.
“It is completely unacceptable that foreign countries and their intelligence services bring their conflicts to Denmark and that Denmark is used as a starting point to finance and support terrorism,” said PET director Finn Borch Andersen in a statement.
ASMLA is based in Denmark and the Netherlands, according to the Dutch authorities.