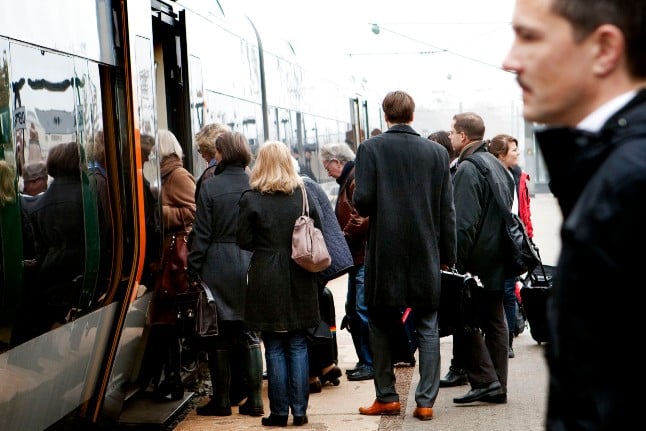 Passengers mounting the train at Kastrup airport. Photo. Linda Kastrup/Ritzau Scanpix
From June 8th, trains return to their normal 20-minute frequency, reducing the risk that crowded carriages could spread coronavirus.
“The trains are still not that crowded but some have been crowded during rush hour,” Mattias Hennius, press manager at Skånetrafiken, the regional transport company, told The Local. “This week we have had the same amount of travellers as last week, so with three trains an hour instead of two, the situation has improved.”
The train will now leave Malmö Central for Copenhagen Central at  13, 33 and 53 minutes past the hour, and return from Copenhagen Airport at 02, 22 and 42 past the hour.
Passengers travelling from Copenhagen to Malmö will be able to stay on the train throughout, but those travelling in the other direction will still need to leave the train and go through a border check, which will take approximately 20 minutes.
Hennius advised travellers to check the Skånetrafiken home page for which trains were the most crowded, so that they could try and avoid them.
He said the number of travellers taking the train over the Øresund bridge had dropped by 90 percent after Denmark brought in border controls, but had since started slowly increasing again.