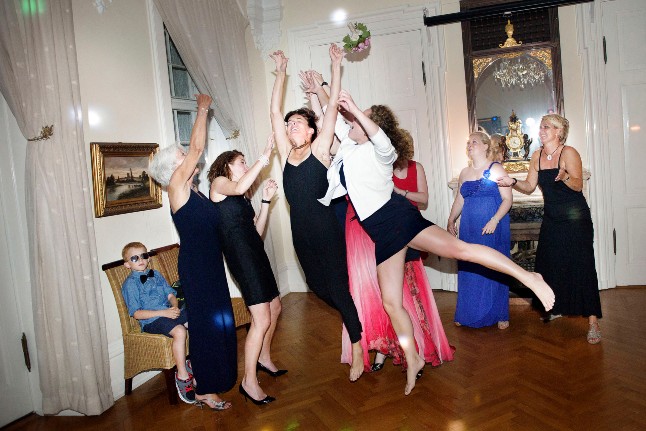 The bride's bouquet is tossed at a wedding in Denmark back in 2014. Photo: Liselotte Sabroe/Ritzau Scanpix
“I think the government has turned the parliament into a kindergarten by thinking that government ministers should convene discussions on whether to hold a party after midnight,” Sophie Løhde, the political spokesperson for the centre-right Liberal Party told the Ritzau newswire.
The government says that wedding parties in a hired venue such as a restaurant should be treated on the category of 'nightlife', meaning that under coronavirus guidelines, they should close at midnight.
Experts said they did not understand the risk of letting weddings running on late.
Lars Jørgen Østergaard, a professor at Aarhus University told the B.T. newspaper that letting weddings go on later would not be a major health risk.
“At the moment the risk of infection is low in most places in Denmark, so I don't think it would mean a big infection risk,” he said.
Christian Wejse, associate professor of Public Health at Aarhus University, said he did not understand why the risk would rise after midnight.
“It's of course an attempt to limit the possibility of superspreader events, but I can't see how the risk would rise after midnight,” he said.