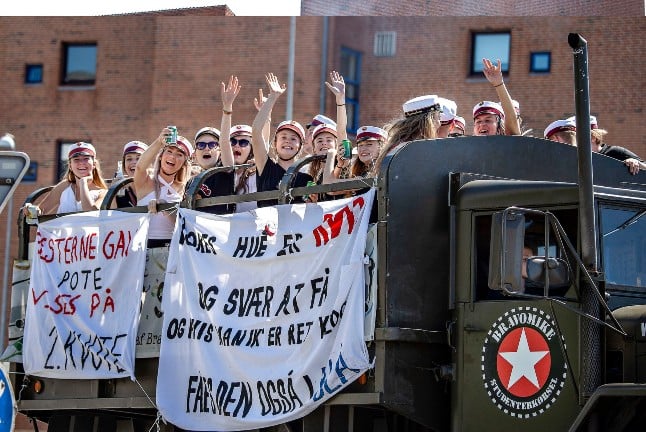 Students will be allowed to ride drunkenly in decorated trucks. Photo: Anne Bæk/Ritzau Scanpix
The decision, made with the support of all parties in Denmark's parliament, shows just how liberal post-lockdown Denmark is becoming.
“I have the unbelievably happy news for the students that, yes, they can actually ride in a 'studentervogn',  Pernille Rosenkrantz-Theil, Denmark's Minister of Children and Education,  told the country's state broadcaster DR.
It was, she said in a press release, “a great experience that you have only once in your life”, so it was “gratifying” that it would not be banned this year.
Denmark's political parties overrode the recommendations of the health authorities in order to allow the truck tours to go ahead.
The Danish Health Authority had said that while the graduation ceremonies as a whole could go ahead, the drunken truck rides, which are traditionally accompanied by wild scenes such as those below, were a step too far. Photo: Anne Bæk/Ritzau Scanpix
Rosenkrantz-Theil conceded it was a “political decision”, and said she would not was the health authority for the best way to implement it.
“As a government and as the parliament, we have had to look at the total package, and we know from young people that the most important thing for them is the truck procession,” she said.
“So we have chosen to say that the graduations themselves are getting smaller, with fewer people meeting across classes.
“So there are some limitations, but the happy news is that it will be possible for them have a festive end both to this period  in education, but also to a spring that in every imaginable way has been a bit strange.”
Jens Henrik Thulesen Dahl, education spokesperson for the Danish People's Party, said that it was worth overriding the health authorities for such an important moment in young people's lives.
“The health authorities will probably never reach the point that they can say this is 200 percent justifiable, so I think it is important that we say that we believe it can be done in defensible way, and we will take the political responsibility for doing it.”
Over in Norway, the authorities decided not to ban the Russetiden, a near month of ceaseless partying, silliness,  snogging and more, which Norwegian students traditionally indulge in before taking their final exams.
Indeed, it is only Sweden, with its supposed lighter coronavirus policy, which has banned the processions.