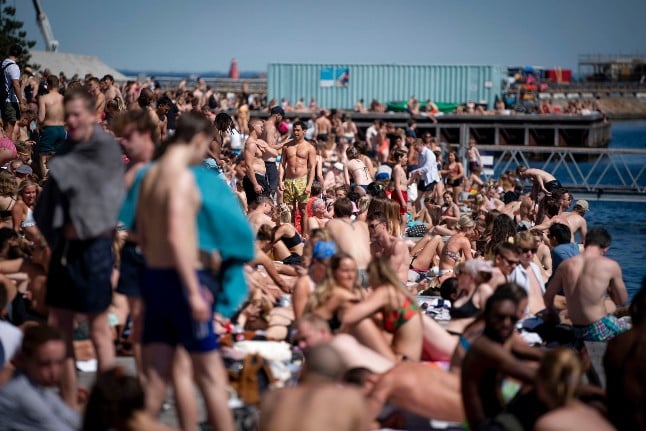 Crowds of sun-worshippers gathering at Nordhavn on Monday. Photo: Liselotte Sabroe/Ritzau Scanpix
“We are trying to give people guidance and remind them to keep their distance,” Henrik Brix, from the Copenhagen police, told the Ritzau newswire at midday.  “It's going reasonably well, but people want to go out and enjoy the sun.” Photo: Liselotte Sabroe/Ritzau Scanpix
In Copenhagen, police have set up special zones with warning signs around Rosenborg Castle Gardens, Islands Brygge, Amager Strandpark, parts of Fælledparken and Gøteborg Plads in the Nordhavn district.
If they judge that these areas get too overcrowded, they can forbid people from gathering.  But Brix said he thought such a measure was unlikely.
By midday, neither Copenhagen nor Aarhus police had had to issue any fines. Photo: Liselotte Sabroe/Ritzau Scanpix
In Aarhus, sun-seekers crowded onto Bellevue Strand and Den Permanente, a sea bath north of the city.
“So far we have been out on some beaches where people are a crammed a little too close together. Then we have a chat with them and they spread out a bit. That's the way we've handled it so far,” Deputy Police Inspector Kristian Juliussen of East Jutland Police told Ritzau.
In North Zealand, police encouraged people to enjoy the good weather on Twitter, but warned them to keep their distance.
“The sun is shining, which is great but also a temptation for many, who will certainly go out to parks, beaches and the sea,” they said. “We are therefore on the streets with extra patrols to ensure people follow the guidelines. Remember to keep your distance and enjoy the good weather.”