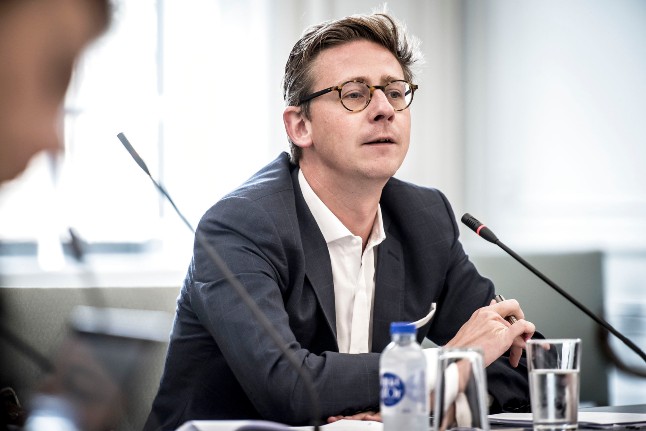 Karsten Lauritzen, Liberal Party vice president, in his days as a minister. Photo: Mads Claus Rasmussen/Ritzau Scanpix
The opposition Liberal, Conservative and Danish People's parties managed to push through the inquiry after winning the backing of the Social Liberal Party, one of the ruling Social Democrat government's support parties.
“We need to know what was the recommendation of the authorities and what was a political decision by the prime minister and the government,” the Liberal Party's vice-president Karsten Lauritzen, told The Local.
“Were the Danish authorities well-prepared? Were the budgets for handling pandemics the right size? It will evaluate the authorities, and also evaluate the difficult decisions that were made by the prime minister and the government.”
The Standing Orders Committee in Denmark's parliament has now appointed a special coronavirus sub-committee which is expected next week to appoint five independent experts to carry out the inquiry.
The decision follows reports in several newspapers indicating that Denmark's government opted for a much more restrictive lockdown than its own health agencies had recommended.
Denmark's prime minister Mette Frederiksen has been pushing for the evaluation of the government's actions to be organised by the ministry of justice, but has been blocked by the other parties.
Nick Hekkerup, Denmark's justice minister, last week told Politiken that it was still too early to begin appraising the successes and failures of the response, as the crisis was far from other.
“The people who would be the central people in such an investigate are those who have been working around the clock since March 11,” he said.
“They still are and we still need them if we're going to get through this safely.”
But Lauritzen, who was minister of taxation in Denmark's last government, said that it was important that the inquiry be fully independent of the government.
“I've been minister of taxation for four years, so I know that when you're investigating yourself, you don't do it in the same way as an independent investigation,” he said.
“There's some sort of shadow game going on, which is that government has no interest in a valuation which goes into the political decisions that were made,” he added.
“It doesn't surprise me, that's the way politics work, but I'm pretty sure we will agree all of us on what should be investigated and what experts should be hired.”